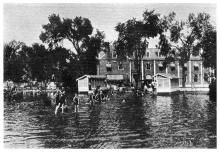 The local water feature on Poor Street in Shawsheen Village has been known as Hussey’s Pond since Elijah Hussey, a Miller by trade, purchased two lots from the Frye family with water rights in Frye Village on Mar. 22, 1830 for $1200. His homestead was on the lot now occupied by the Aberdeen building. Elijah operated a grist mill, saw mill and Machine shop all powered by Hussey’s Brook. Laundry stocks were later added on the brook on the east side of North Main Street down near Riverina Rd.

Elijah also bought the water rights and dam on the pond. The flowage rights involved keeping a pre-determined level in the pond from April 20th to October 20th to assure water down the flumes to the mills below. This flowage is stated in a deed from James Parker to Samuel Frye in October 1765 which included the grist mill. After Elijah’s death in 1869 two of his sons Wyman and Charles took over running the saw mill and laundry stocks.
Jan. 21, 1870 Andover Advertiser (AA) - W. D. & C.G. Hussey have leased the Mills in Frye Village belonging to the heirs of Elijah Hussey – new and improved stocks for washing clothes, carpets, etc.
Jan. 9, 1874 AA – Charles G. Hussey has taken the saw mill and clothes washing concern in Frye Village and will carry on the business.
Oct. 4, 1889 p.8 FV – The old grist mill near the canal was torn down this week by Hardy & Cole. This will be a great improvement to the corner.

The spring fed pond also provided an excellent quality of ice in the winter which was harvested and stored in a large ice house on Poor St. Brooks F. Holt had a large ice house on the Poor St. side of the pond and built a new one at the end of Iceland Rd.
Nov. 24, 1899 Andover Townsman - Work has begun this week on the new ice-houses being constructed by B. F. Holt at Hussey’s Pond, Frye Village.
Holt’s ice house was built at the end of Iceland Rd. but created a conflict between Holt and Hussey as he had failed to get permission to cut ice on the pond. Charles Hussey then gave the contract to the Ward family on Lowell St. Feb. 2, 1900 AT - The ice on Hussey’s Pond is being harvested by Anthony Ward and son, George, for private consumption. B. F. Holt then cut ice on Poor’s pond on William M. Wood’s estate to store in his ice house.
July 4, 1903 – AT July 10 – Independence Day – Three Fire Alarms - …an alarm from box 65 Frye Village Center for Brooks Holt’s old ice house, which had been set on fire as part of the celebration in the Village. As it was useless to attempt saving the building, the department pulled over the walls and extinguish most of the blaze, leaving the pile smoldering in a few places.

Brooks F. Holt purchased the Andover Ice Co. in 1905 from the Joseph H. and T. Frank Nuckley who then created the Peoples Ice Co. in 1906. Holt and the Nuckley brothers merged in 1914 supplying ice to the residents of Andover. Peoples Ice Co., was sold on Oct. 1, 1926 to Metropolitan Ice Co. but retained the former name. The New England Cities Ice Co. purchased the company and the pond in 1931 which they held until 1944 then selling to Alice L. Beetle on Nov. 17, 1944. N. E. Cities Ice Co. was the last to harvest ice from Hussey’s Pond.

Ice skating was also a popular pastime in the winter and Hussey’s pond provided an excellent spot for the children of Frye Village to hone their skills. Nov. 2, 1894 AT -Tuesday morning several of the boys were skating on Hussey’s Pond, but it was not very safe, judging from some wetting which we heard were received during the day. Be cautious on the early ice.

June 15, 1900 AT –“The Hussey estate at Frye Village, including property on both sides of Main Street, with water rights, is for sale. Several offers have already been made for it.”
Paul Warren Hannagan of Lawrence purchased the Homestead and flowage rights on July 17, 1900. Fannie Smith, wife of Joseph W. Smith acquired the property on the east side of North Main.
August 3, 1900 AT - Paul Hannagan has begun his work of improvement at the Hussey estate in the Village. The old buildings on the land on the East side of the street, which have been purchased by Mrs. Joseph W. Smith are being removed.
Aug. 17, 1900 AT - Water at Hussey’s Pond has been drawn off to allow work being carried on in connection with construction of the Turkish baths and Swimming tanks.
Aug. 31, 1900 p1. AT - Poor Street, Frye Village, has been closed this week to allow for the rebuilding of the culvert running across from Hussey’s Pond.
p.5 The work of constructing the baths and tanks at the Village Centre is proceeding as rapidly as possible.
September 14, 1900 AT - Work on the Turkish baths and swimming tanks at the Village Centre has been discontinued for over a week.
October 5, 1900 AT - Paul Hannigan resumed work last Monday on the Turkish baths.

The foundation for the baths was all that was constructed and show up on the 1906 map of the village.

In May 1916 the Massachusetts Fish & Game Commission built a Salmon hatchery at Hussey’s Pond on land owned by William M. Wood. The plan was to reintroduce 400,000 Salmon to the Merrimack River. Fifty stock pools were built each with 8000 Pacific Chinook Salmon eggs from the Columbia River in Oregon. They were held, fed and, when old enough, released into the pond to feed for themselves. After six months they were released into the stream to the Shawsheen River and down the Merrimack to the ocean. It takes four years for the Salmon to mature and return to the spawning spot. The hatchery was not a success. Hussey’s Pond however was a popular place for the locals to fish and was always crowed in April on opening day of fishing season. The Andover Sportsman's Club held an annual fishing derby in town on that day awarding a prize for the largest fish caught. Every pond, river and stream was lined with anglers vying for the prize.

Frye Village would be transformed by William M. Wood when construction of Shawsheen Village began in 1919. Poor Street once wrapped around the south side of Hussey’s Pond and crossed Lowell St. along the drive on the west side of the park. Wood removed all the buildings on the corner, straightened Poor St. to end in the square. A small park was created where the Luncheonette building is today. It was enclosed by a stone wall, lighted pillars and the grass area for swimmers and spectators to sit and relax. A horse tough and water fountain was erected on the corner in memory of Wood’s daughter Irene who died in the influenza pandemic in 1918. The fountain was moved to Wood Park in the 1960’s.

Wood drained Hussey’s Pond, lined the bottom with sand, rebuilt the dam to create a safer swimming pond for the residents of Shawsheen in 1920. The pond also played its part in supplying ice and cold water to the Post Office building and A.W.Co. Mills. A description of the new building includes the following:
AT May 7, 1920 PO building – Lavatories – not only running hot and cold water but ice water also. This is cooled in a coil in the basement which runs through a tank filled with ice. The ice used in the building will be obtained from the ice house seen on the shore of Hussey’s Pond where 2000 tons have been stored for use here and in the mills of the American Woolen Company in Lawrence.
Views from the windows….. All the western windows give a view of Hussey’s Pond, whose little spillway has been finished with cement steps, making an ideal place from which to bathe, a convenience which will doubles be much appreciated by the small boys of the village.

June 16, 1922 AT – Swimming Pool Temporarily Closed
The swimming pool has been closed for a short period as many who are not residents of Shawsheen have been using the bathhouses and leaving them in a very untidy condition. The pond has also been overcrowded and the Shawsheen children have not been able to enjoy themselves as was intended when the swimming pool was constructed.
It is hoped that in the very near future a keeper will be appointed whose duty it will be to see that only residents of Shawsheen make use of the swimming pool.
June 30, 1922 – The swimming pool has been reopened and Donald Leach has been placed in charge. Only residents of the Village may use the pool
The children’s bath house has been built at the swimming pond in the rear of the Kay Bungalow. This bath house is exclusively for the children of the Village.
Aug. 4, 1922 Pg. 8 - Bathing Facilities – A large bath house for young women has been erected at Hussey’s pond, making three bath houses; two for women, and one for boys. The pond was partly drained this week to allow the bathing facilities to be improved. A place for youngsters to paddle will be built on the shore of the pond and a section will be set apart for those who can swim. The pond will be drained shortly so that a cement floor can be laid in the paddling and swimming basins.

William M. Wood died on February 2, 1926 and was interred at West Parish Cemetery. All his land holdings in the Arden Trust were then sold off. The properties adjoining Hussey’s Pond were sold and Hussey’s Pond bathing pool ceased as it would become a liability for the new owner.
Sept. 24, 1926 - The little bathhouses which ornamented the dam at Hussey’s pond have all been torn down and removed this week. They were erected as an expression of Mr. Wood’s thoughtful interest in the comfort of the children using the pond for bathing.

Hussey’s Pond has always served the residents of both Villages that lived and worked here. Since the 1660’s the water power has been harnessed to run grist and saw mills, power machinery in the 1880’s for the flax mill and the Hussey laundry stocks. Today it remains a quiet pond except for the spillway at the dam as the water continues to make its way down to the Shawsheen River below.