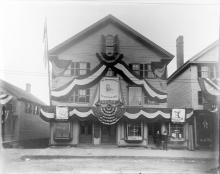 The wood Draper Block was built circa 1820 as a Federal period two story home on the Essex Turnpike which was constructed in 1806-9. The original hip roof, pictured in the center in the period photo was converted to the large gable end style in 1869-70 when Warren F. Draper began the remodeling the old house into a business block during the summer of 1869.
Sept. 7, 1866 Andover Advertiser - William F. Draper has hired the shop on Main Street, recently occupied by Mr. John H. Dean, & is fitting it up for a book store……#41 Main Street
Oct. 12, 1866 – Removal - The subscriber has removed to the store recently occupied by John H. Dean, nearly opposite the Post Office, on Main St. where he will keep all school books used in the several academies and schools in town., together with a general assortment of standard and miscellaneous books and a large variety of stationary, etc. WM. F. Draper.

Draper’s book store was the Andover Bookstore founded in 1809 and its branch publishing house the Andover Press established in 1813 by Flagg & Gould. Deacon Mark Newman was the original owner and his son Mark H. Newman became a partner of the Press Co. in 1833 under the name of Gould & Newman until 1841. Then Allen & Wardwell 1841-1847, W. H. Wardwell 1847-48, Flagg & Wardwell 1848-1849, and then W. F. Draper in 1849 purchased both businesses. In June 1866 the Andover Book Store near the Theological Seminary and the Job Printing office were offered for sale. On September 1, 1866 W.F. Draper & Co. dissolved the partnership with W. H. Halliday and moved his bookstore down to the center of town from the brick building on the Hill. Draper first rented the store space formerly occupied by John Dean’s Gents store in Swift’s building at 41-44 Main St. before purchasing the residence next door to the north.

On April 15, 1868 Draper purchased the house from Henry W. Abbott., Apr. 24, 1868 AA – “Abbott has sold his real estate on Main Street, second south of the bank building, to Warren F. Draper. It is understood the Mr. Draper will fit up the house for a book store and printing establishment”. On May 8, 1868 the paper reports, “W.F. Draper will erect a dwelling house this season upon his beautiful lot opposite the Female Academy”.

The following year Draper remodeled the old Abbott house into the business block that would then become known as the Draper Block.
June 18, 1869 AA - W. F. Draper is about to make extreme alterations to his establishment on Main St. M. L. Ramsdell, who has occupied a part of it for a fancy goods & confectionary store, is consequently obliged to shut up shop for a while. Ramsdell later moved his shop to Hyde Park by Dec. 24, 1869 but continued as a Singer Sewing Machine traveling agent with business connections through John H. Dean at 44 Main St. in 1871.
Sept. 17, 1869 AA - Wm. F. Draper is enlarging and improving his building formerly owned by H. W. Abbott on Main Street. The main structure is to be raised twelve feet, making it 3 stories his in front and four in the rear. Besides providing himself with ample accommodations for his book and printing business he will finish a commodious and convenient store to let. The lower story will stand two feet higher on the street than formerly, which will not only look much better, but greatly improve the sidewalk for pedestrians. The work is done by W. S. Jenkins and the masonry work by E. C. Upton.

On April 29, 1870 AA - Draper advertises, “a commodious, convenient, and central store, and several other valuable rooms in his building on Main street”
“New Store to Let, situated on Main Street opposite the Town House, the best location in town. The store is 21 feet wide, having two bay windows, and 40 feet deep with a basement under, and a cellar below that. The store is ready for shelving, and will be fitted up to suit the occupant, if applied for immediately.” Also to let, in the second story of the same building, six very well lighted commodious rooms, suitable for offices and many kinds of business.”

Draper moved into his new store at #37 in mid August 1870. The paper described it as very convenient and tasteful book store, publishing house and printing office. His advertisement states he has a full supply of text books for the Academies and Schools.

A fire at Elm Square May 26th 1870 (site of Memorial Hall Library to Pearson St.) totally destroyed the businesses and residences of several tradesmen. Abbott & Smith Furniture store reopened for business in the new store at #33 by June 10th becoming Draper’s first tenant. Charles Mayers Harness Shop, also burned out, was reported to have moved first to the Swift building, then to Draper’s basement in August and in October his advertisement changes location to the Barnard Block. Joseph Abbott & G. Emory Smith dissolved their partnership in December 1870 and Joseph Abbott continued under his name but removed to the new Barnard Block. He would move again to the Derby block in May 1871. In April it was announced that A. N. Davis and Albert Callahan are fitting up rooms in Draper’s building for a book bindery business.
April 12, 1872 AA- W. A. Corse has taken a room in Draper’s block – window shades & fixtures.
April 25, 1873 – Messrs Dugan & Pasho have engaged in upholstering and furniture repairing in Draper’s Block, Main Street (basement). On Dec. 1, 1873 they dissolved their partnership & on Sat. Dec 22 a Constables Sale of furniture & upholstery goods at Drapers block is advertised.
Oct. 3, 1873 Dr. Richards has removed his office to Draper’s building. In March of 1874 he was advertising his office a few doors south of the Post Office. James M. Crabtree also advertises Coffins, Caskets & Robes – at Drapers Building – He was associated with Woodman in the brick block at #18 Main and later on Park St.
June 13, 1879 AA – W. F. Draper is about to erect a brick building in the rear of his store on Main Street.

Warren Draper retired in Aug. 1887 after 28 years in business. The printing business was sold to a corporation of Andover businessmen in 1887. John N. Cole was made manager & treasurer and the Andover Press then began the publication of the “Andover Townsman”. George H. Higgins became the proprietor of the bookstore. June 24, 1894 AT – Warren F. Draper is making an addition to his Main Street block in order to give the Andover Press increased office facilities. Brainard Cummings is doing the work. Draper sold his building to the Trustees of Abbot Academy in 1895, where he had been trustee, school treasurer and benefactor for many years. Draper Hall was named in his honor in 1892. He reserved however a life tenancy for himself and his wife at his building on Main Street.

A brick printing building was constructed onto the rear of the building and the press remained here until December 1906 when they moved to the new Andover Press Building at #60 Main Street. The Bookstore followed to the new location in early 1907.

There was once a small store on the east side of Main at #50, between the Dean store to the north and the Richardson house to the south. It was occupied by Andrew Basso’s fruit store. That store building and Basso’s business were temporally moved during construction of the ARCO building to Chestnut Street behind the Press building in Dec. 1906. Basso later relocated to #37 from 1907-1910 then moved again to #29 in the Barnard Block in 1910. H.S. Wright moved into Basso’s former space as Wright’s store was about to be razed for the new Barnard Building 10-18 Main. O’Keefe’s grocery is here in 1926. The First National Store also occupied this location 1928-31, one of several moves on Main Street before opening in the new Barnard Block in 1931 at #10-12. A second First National Store operated at #92 Main from 1932-1942. City Cleaners then occupied #37 from 1931 – 1957 and moved to 8 Park St. in Feb. 1957.

George H. Parker, apothecary occupied #33 in May 5, 1871 along with John E. Whiting’s Jewelry store. They formerly shared space together in the old Derby/Valpey building #2 Main Street from 1868-1871. Apr. 21, 1871 “Selectmen have discontinued the town liquor agency and Geo. H. Parker has a license to sell liquor as an apothecary and will be ready to supply all proper wants in that direction”. April 28, Parker moves to Draper block, and June 9, 1871 Parker draws sparkling soda and uses choice syrups. John Cornell’s wood & coal office also continued at Parker’s store. Whiting later moved to a shop by himself in April 1874 into the shop formerly occupied by Walter S. Donald. (at #17 Main.). In 1900 Albert W. Lowe became associated with Parker’s business and purchased it in 1902. Lowe moved the drug store to the new Press building in Jan. 1907.

Andover Townsman, Jan. 25, 1907 pg. 1 Store vacated by A.W. Lowe is being thoroughly overhauled and repaired for William C. Crowley & Co., who will occupy it as a drug store in about three weeks. William Doherty is doing the work.
Feb. 22, 1907 AT Pg. 4 - Open New Drug Store Crowley & Co., the new owner of the building William J. Burns – new front, windows and interior changed – opens Saturday the 23rd
Mar. 22, 1907 AT pg. 1- A new front is being put in the stores occupied by Walter I. Morse & O. P. Chase in the Belmont Block (Barnard Block #27-31). The J. W. Barnard heirs own the building, and the work is being done by Pike & Son. W. J. Doherty is also putting in a new front store formerly occupied by the Andover Book Store & owner W. J. Burns. (Draper Block)
April 19, 1907 AT - Editorial Cinders. Marked improvements in the two old wooden buildings on Main Street occupied by the stores from Chase’s newsstand to the old bookstore has the effect of improving the entire center of the town…….
May 24, 1907 AT - Draper block fire. Alexander Valentine – cabinet maker on the 3rd floor, stove explodes – hot wax – tries to carry stove out – drops on 2nd floor stairway – climbs out on roof – calls for help – extinguishes fire.
Sept. 13, 1907 AT - pg. 1 Look out for the “Kandy Kitchen” at J.P. West’s in a few weeks. [West owned a bakery]
May 27, 1910 AT - H.S. Wright is to move to Basso’s former store as Wright’s buildings to be torn down. (#37 Main – Draper Block)
Mar. 10, 1911 AT - p. 8 Crowley & Co., the local druggists are to move into the store in the new Barnard Block at the South end of the building. [#18]
Mar. 30, 1911 AT - pg.1 - W.C. Crowley & Co. have moved into their new quarters in Barnard’s Block.
April 7, 1911 AT - Mike Francis, the cobbler of North Main Street, is to move into the store occupied by Crowley & Co. Mr. Francis expects to effect the change about the middle of the month and is planning to open a reliable shoe & repairing shop.
Harry H. Remick of the Andover Coal Company moved to the Draper building with J. P. West’s bake shop at #33. Both had shared the shop on Barnard Street. Remick would later move to Post Office Ave & then the Musgrove building by 1923.
The Andover Candy Kitchen opened in September 1912, owned by J. P. West and then Paul Giggis, operated at this location until 1948. The store then became Swanton’s Snack Shoppe and closed in 1957.

Aug. 3, 1957 AT- Draper Block being dismantled – workers found old Townsman papers between the floor boards from 1899.
The Draper block was razed during the summer of 1957 and the lot remained empty for nearly twenty years.The empty lot was purchased by the Andover Savings Bank in 1973. ASB would acquire all the property between the two banks for re-development in the 1970’s & 1980’s.

The upper floors of this building also contained professional offices and resident apartments. In 1885 Dr. J. C. Pennington had his office and residence over Draper’s Book Store. Dentist Charles Abbott’s office was here and Charlotte Helen Abbott, town historian and frequent writer for the Andover Townsman called this home until her death in 1923.