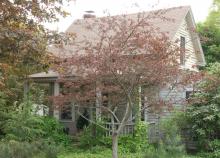 Modified Cape style cottage, built as a camp, it has nice proportions and simple cottage charm with front porch across the front facade.

Boston Road has had several names through the years including, Old County Rd (1915), Foster’s Pond Rd. 1930-1935, Old Boston Road and then Boston Rd. by 1937. Deeds can be confusing at first and street directories misleading as we now have a County Rd and Foster’s Pond Rd adjoining Boston Rd. What appears as a move to another street is actually a street name change. Andover Valuation Schedule add to the issue by listing the road as Main St. This area is in the South District in the Valuation lists and within the Scotland School District from 1785-1902. Only one house is listed on the road in 1906 at #5. With development came an influx of French Canadians who purchased lots on Boston Rd. It was sometimes referred to as “Frenchville” by locals.

This property was once owned by Rufus Caldwell and was part of his 75 acre farm. His house was located east of Boston Rd. between So. Main St. His estate was auctioned off after his death in October 1891. The property was purchased by Brooks F. Holt for $1500. Brooks F. home was on South Main St. and he was an Ice Dealer in town. Brooks later sold his business and began selling off parcels of the former Caldwell farm.