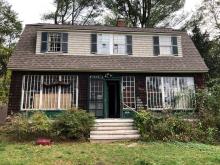 There is a large porch along the whole front (west side) of the house, about 30 feet. It is enclosed with glass - individual glass frames, all vertical stripes

This land was once owned by John Nuckly who sold a three acre parcel to May P. Haggerty on June 13, 1882. Haggerty later sold the three acre parcel to Martha W. Packard in February 1911. Martha sub-divided the parcel into three one acre lots, two fronting on South Main St. and one on the corner of South Main and Orchard St.
This parcel was the middle lot and was sold to her daughter Frances E. (Packard) McClellan on Oct. 11, 1916.
Once designated 2 Orchard St. but now 332 South Main the bungalow style home was designed by neighbor, Addison B. LeBoutillier. A driveway from Orchard St. came across the corner parcel and continued in front of the house and out to South Main.

In 1990 John McClellan stated; "My mother Frances McClellan bought the original one acre from her mother, Mrs. A.S. Packard in July 1916. She joined the November Club, did all the work for six children, and sent them all through school, and some to college. In about 1934 she started a gift shop in the sitting room. There was a sign on the Main Street saying "McClellan Gift Shop" till 1971. She always had a garden, and every kind of fruit tree or berry.

Frances Elizabeth Packard was born on May 9, 1880 in Providence, RI, daughter of Alpheus Spring & Elizabeth Derby (Walcott) Packard. Frances married on April 5, 1904 in Providence RI to Percy Webb McClellan b. June 4, 1866 in Woodstock, CT. Frances & Percy had six children; Elizabeth Walcott b. Mar. 3, 1905 in RI, John v. Jan 7, 1907 in MA, Hugh Ruby b. Nov. 1908, James Trumbull b. June 1910, Frances Appleton b. Dec. 1911 and George Oliver b. Dec. 29, 1914. The McClellans moved to Haverhill, MA and settled in on a farm on North Broadway, near the Lake. Percy was a farmer and died on June 3, 1916 at age 49. The 1910 Census lists the McClellans in Haverhill with four children and mother-in-law, widowed Elizabeth Packard age 65. Frances P., McClellan raised her family in her home in Andover. Frances died on Sept. 14, 1971.
She wass interred at Woodstock Hill Cemetery in Woodstock, CT with her husband Percy.