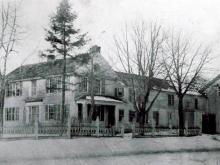 On this site was the Elijah Hussey homestead. Elijah was born on Apr. 28, 1801 in Rochester, NH son of Elijah & Elvira Hussey. Elijah married on Aug. 15, 1827 in Andover to Rosina Mooar. B. Mar. 19, 1804 in Andover, dau of Jacob & Phebe (Chandler) Mooar. Elijah was a Miller by trade, and purchased two lots from the Frye family with water rights in Frye Village on Mar. 22, 1830 for $1200. His homestead was on the lot now occupied by the Aberdeen building. He operated a grist mill, saw mill and laundry stocks on the brook on the east side of North Main Street on the site of the Shawsheen Garage. Elijah also bought the water rights and dam on the pond that now bears his name Hussey’s Pond. Their house faced south with the brook running through the front yard turning under North Main St. (Essex Turnpike) and out beside the saw mill and then downward to the stocks and emptied into the Shawsheen River. Flowage rights involved keeping a determined level in the pond to allow water down the flumes to the mills below. It had to be maintained from April 20th to October 20th.

Elijah died on May 25, 1869 age 68y 27 days and is interred at West Parish Cemetery. His obituary in the Andover Advertiser states….but for more than forty years was a respected resident of Andover. As a husband and father he was affectionate and kind, as a neighbor, friendly and obliging, scrupulously honest and upright, in all his dealings, and a useful and industrious citizen. He had been indisposed for several months, but bore his protracted sufferings with patience and resignation. Elijah left his estate to widow Rosina, item 7 “all my real estate, dwelling houses, sawmill, wash house and all other buildings with the land.” Item 8 After Rosina’s death all his six remaining children would get an equal share, if any pre-deceased it would go to the grandchildren. Elijah stipulated that he did not want the homestead sold and each child had use of it during their lives.

Rosina Hussey died on Oct. 6, 1878 at age 71y 6m, 17d. The six remaining Hussey children then held 1/6th share of the house and mills. Charles and his brother Wyman kept the mills and laundry stocks running for a period of time. The 1880 census lists Charles as a “Miller”.

Rosina Angelina Hussey married on Dec. 15, 1878 to Augustus Hobbs, a carpenter. She was his third wife. Augustus first wife Sarah Dustin and their two daughters Sarah O. and Laura all died of Typhoid fever. His second wife was Ellen M. Locke b. Stoneham, MA dau. of Luther & Lucinda Locke. They had one daughter Sarah “Sadie” Maria Hobbs b. April 8, 1866. Ellen died on Mar. 4, 1874. Angelina, Augustus and Sadie lived in the Hussey homestead with her brother Charles. Angelina died on July 28, 1899 and would be the last of the Hussey heirs to occupy the homestead.

Elvira Augusta Hussey married on Dec. 31, 1863 to the Hon. George Foster who was a prominent Andover businessman, Selectman, Town Moderator of 55 Town Meetings and active member of the Free Church. They lived on Chestnut St. George was killed in a train accident on Oct. 24, 1885. Elvira died on Aug. 17, 1892 of heart disease. They are interred at South Parish Cemetery.

E. Walter Hussey b. March 6, 1833 enlisted during the Civil War served on Mass. Vol. Co. C 40th Regiment. Walter also served in the Mexican War. Walter worked for the Boston & Lowell Railroad as a car inspector. Walter married on March 2, 1861 in Lawrence, to Sarah A. Bridges born in Maine dau. of Isaac & Margaret (Evans) Bridges. They had one daughter Ella Florence b. 1865 and lived in Lowell, MA. Walter died on Sept. 1, 1884 and is interred at West Parish Cemetery.

Wyman Dwight Hussey born Feb. 13, 1843 also served in the Civil War in the Mass. Co. H, Heavy Artillery. Wyman worked with his brother Charles operating the Hussey saw mill and laundry stocks intil 1874 and moved to Sandwich, NH. Wyman married in Farmington, NH on Mar. 31, 1880 to Nancy Ellen Vittum b. May 17, 1848 in Sandwich, NH dau. of Mark Jewell & Abby Julia (Mudgett) Vittum. In 1900 they reside in Lowell, MA where Wyman is now employed by the Railroad as a car inspector. Wyman & Nancy had no issue. Wyman died on Feb. 2, 1917 in Laconia, NH, and Nancy on Oct. 15, 1920.
They are interred in Bayside Cemetery, Laconia, NH.

Charles Greenleaf Hussey b. April 28, 1845 graduated from Phillips Academy in 1862, became a Miller, working with his father and took over the business after Elijah died in 1869. Charles married on May 23, 1867 in Andover to Mary Harrison b. 1843 in Newton Lower Falls, dau. of Edward & Rachael (Hutchinson) Harrison. Charles and his older brother Wyman D. leased the Hussey mills from their siblings and made improvements.
Jan. 21, 1870 Andover Advertiser. W. D. & C.G. Hussey have leased the Mills in Frye Village belonging to the heirs of Elijah Hussey – new and improved stocks for washing clothes, carpets, etc.
Jan. 9, 1874 AA – Charles G. Hussey has taken the saw mill and clothes washing concern in Frye Village and will carry on the business.
Oct. 4, 1889 – p.8 FV – The old grist mill near the canal was torn down this week by Hardy & Cole. This will be a great improvement to the corner.
Charles and Mary had two sons; George Elijah b. Aug. 31, 1868 and Edward H. b. Dec. 4, 1874. Edward died on May 1, 1893 age 18y 6m 27d of Tuberculosis. Charles would continue the operation of the saw mill and washing laundry stocks in Frye Village but now lived at 5 Chestnut Street. When he closed the mills he worked for Tyer Rubber Co. His sister Angelina Hobbs remained in the homestead. After the death of Angelina on July 28, 1899 the remaining Hussey heirs decided it was time to sell the old homestead. Charles died on Feb. 13, 1907 while on the job in the rubber factory.

News items from the Andover Townsman highlight what followed.
June 15, 1900 AT - The Hussey estate at Frye Village, including property on both sides of Main Street, with water rights, is for sale. Several offers have already been made for it.
Paul Warren Hannagan of Lawrence purchased the property on July 17, 1900 which included the house and the all-important flowage rights from Hussey’s Pond.
July 20, 1900 AT - Augustus Hobbs and daughter Sadie, have moved from the house on the Hussey estate, just purchased by Paul Hannagan, to Chickering Ct. near Elm Street.

Paul W. Hannagan was b. Jan. 16, 1853 in Lawrence, MA son of Daniel & Catherine (Demsey) Hannagan. His father was a Tailor. Paul was a bit of an entrepreneur, began as a plasterer, then brick mason, in 1893 District Police, then selling spring water and by 1900 was in real estate.

August 3, 1900 AT - Paul Hannagan has begun his work of improvement at the Hussey estate in the Village. The old buildings on the land on the East side of the street, which have been purchased by Mrs. Joseph W. Smith have been removed.
Aug. 17, 1900 AT - Water at Hussey’s Pond has been drawn off to allow work being carried on in connection with construction of the Turkish baths and Swimming tanks.
Aug. 10, 1900 AT - P. 4 Editorial Cinders – The Turkish Baths
p. 5 When Frye Village Booms article on Paul Hannagan’s Turkish Baths
Aug. 31, 1900 p1. AT - Poor Street, Frye Village, has been closed this week to allow for the rebuilding of the culvert running across from Hussey’s Pond.
p.5 The work of constructing the baths and tanks at the Village Centre is proceeding as rapidly as possible.
September 14, 1900 AT - Work on the Turkish baths and swimming tanks at the Village Centre has been discontinued for over a week.
October 5, 1900 AT - Paul Hannigan resumed work last Monday on the Turkish baths.

Ultimately only the foundation was ever built and Fanny S. Smith acquired the flowage and riparian rights and in her deed to Paul Hannagan restricts use of her land with the clause that “no bath house or mill shall ever be erected there on and that no obnoxious or offensive business shall be carried on there on.”
March 28, 1902 AT – p 8 col. 6 - The old barn on the Hussey place has been torn down and removed.

The Hussey homestead does not appear on the 1906 map of Frye Village and is not listed in the 1910 census. The house was most likely razed by the Hannagan family between 1902-1905. It has been suggested by other historians to have come down sometime during WWI. Knowing that Mr. Wood saved and moved many of the original homes in Frye Village and incorporating them into Shawsheen Village, that he would have done the same with the Hussey home.