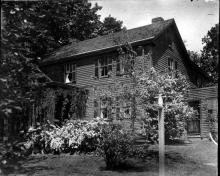 The property along the east side of North Main from Haverhill to Kenilworth Streets was once owned by Theophilus Frye. Most of his land was deeded to his son Reuben Frye in the 1820’s. Rueben then sold the Frye estate for $8000 on Mar. 9, 1829 to Dr. Joseph Kitteridge, Thomas C. Foster and Stephen Abbot
All prominent citizens in Andover. The parcels of land were then sold off separately.

Ephraim and Rhoda joined South Church on Jan. 1, 1832, was a Deacon, but left on April 5, 1846 to become charter members of the Free Christian Church, an Abolitionists congregation founded by John Smith who Everson worked for and lived next door to. He was most likely involved with the Underground Railroad’s safe passage through Frye Village. Ephraim sold his home to William C. Donald on May 30, 1858 and then moved to Haverhill, MA, setting up shop there. His obituary states “ Dea. Everson learned his trade of a machinist, of John Smith at Frye Village, in the town, and continued to be employed in the same machine shop for a long period of time. He Removed to Haverhill some twenty years ago. He was a man of strict integrity, and lived an exemplary Christian life. Ephriam died on Apr. 21, 1881 at age 74. He and his family are interred at South Parish Cemetery.

William Couper Donald b. Mar. 7, 1816 in West Craig two miles from the town of Forfar, Forfarshire (Angus) Scotland. William age 15, first apprenticed to a miller in the parish of Tannadice for about six years. William then went to Farnell where he met and married on Sept. 13, 1839 in Brechin, Scotland to Agnes Bain Smart b. May 21, 1841 Scotland, dau. of William & Jane (Johnson) Smart. The Donald family immigrated to America arriving in NYC on July 26, 1844, then to Andover. William & Agnes joined the South Parish Church on Jan 5, 1845 from the Presbyterian Church in Scotland. They also would leave the following year on April 5, 1846 to become charter member of the Free Christian Church.

William purchased property on Holt Rd. from Leonard Wheeler on Sept. 17, 1852. An Ink shop is located there on thee 1852 map of Andover. Donald established a lamp black and printing ink manufacturing company with partners Samuel & George Morrill. The Morrill, Donald & Co. Ink Manufacturing factory was located near the site of the Public Safety Building at 20 North Main St. The factory was a former Andover & Wilmington Rail Road repair building purchased by Morrill in 1851.

AA July 6, 1866 – The printing ink factory of William C. Donald in Frye Village was burned on Thursday afternoon, together with the contents
AA Sept. 7, 1866 William C. Donald has rebuilt his printing ink establishment, which was destroyed by fire a few months ago. It is now built of brick with fire proof roof and is divided into eight apartments each so distinct form the other that a fire cannot be communicated. The engine was so little injured by the late fire that the manufacturing of ink was continued without interruption. Mr. D. occupying “all out doors” for his factory. Having perfected his machinery, and completed arrangements, he is now prepared to supply all orders.
AA Dec. 5, 1873 – William C. Donald is erecting a building 30 x 40 feet with sixteen feet posts for a lamp black house in connection with his printing ink manufactory at Frye Village.

William was a devout Christian, abolitionist, taught Sunday school for the church for 50 years. William & Agnes celebrated their Golden Anniversary in 1889. William retired in 1892 and the business was then taken over by his son Walter S. Donald. Agnes died on Feb. 2, 1893. William wintered in Boston for 12 years after his wife died at 227 Newbury St., the home of his daughter Charlotte and her husband Dr. George Garland. William died there on April 22, 1906. William was the oldest and last original charter member of the Free Church. William and Agnes are interred at South Parish Cemetery, Andover.

The Frye Village was transformed into Shawsheen Village from 1919 -1926. Once Wood had the property he moved to the house to the current location and built three more houses just north of the site.
Aug. 1, 1919 -AT Frye Village Transformed...... "Then came the moving of that old landmark, the Donald homestead, which had been for many years the summer home of Dr. George M. Garland’s family of Boston. This is now back on a line with the Smith house and faces the street. It also faces its beautiful old-fashioned garden that has been one of the delights of Andover flower lovers for a long time. Two more houses, one of brick and the other a Colonial frame house, are being builded between that and the inkshop."

The Donald Ink Factory was located beyond north of their home just before Kenilworth St. and was not sold until after Wm. Wood’s death in 1926.

The house is sometimes referred to as “Garland House” as it was used as an annex for the Shawsheen Manor and William & Agnes youngest daughter Charlotte S. Donald married George M. Garland, a physician in Boston. They lived on Newbury St. but summered in Andover in the Donald House until it was sold.