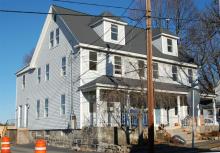 This property was once owned by Eliphalet Pearson. His estate was administered by Trustees Ephriam Abbot and Stephen Gardner on Sept. 12, 1826. The trustees sold this portion of the estate to Joshua H. Ward of Salem, MA who purchased five separate parcels containing several house lots on Dec. 25, 1830 for $1267.

Elizabeth C. Stack died on March 30, 1945 and Annie M. Stack became sole heir of the property. Annie M. Stack died in 1948 and her estate was administered by May E. Cox, Executrix on Sept. 7, 1948. At this time the property was divided into two separate parcels with lot A being the apartment house and lot B, the old Stack homestead. See Map #1928 - Sept. 1948 -

Sullivans owned for seven years then selling to Theodore F. & Shirley Delaney Oct. 15, 1962. Shirley E. Delaney held the deed on Nov. 15, 1971 and with her death the property went to her children heirs; Judith A., Daniel F., David I. Delaney & Linda Gailey. The Delaney heirs then sold on Nov. 1, 1982 to
Charles A. & Sandra E. Galley. Galley later placed the property into the
Xena Realty Trust with Sandra E. Galley, trustee on May 21, 1992.

In 2007 the Town of Andover took the property by eminent domain, purchasing the land and house with future expansion of the Town Yard as the goal. The
Town of Andover has held the deed since Aug. 23, 2007.

The Andover Youth Services had been raising money to build a new youth center and were quartered in a room in the town office building. The town turned the Stack home over the the Youth Services as a temporary home until such time as the money could be raised for a youth center.

In 2014 ground was broken behind Doherty Middle School and construction begun on the new Cornier Youth Center open in the spring 2016. This former home was razed by the town after a sight visit from the Andover Preservation Commission of Dec. 20. 2016. The house came down on December 22, 1916.