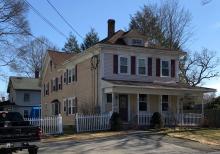 These houses represent two different periods of architectural styles. The rear home appears to have been turned 90 degrees when placed on the lot. Bay windows appeared in the 1870's and it appears to be Queen Anne style but was built in 1911.
The house at the street appears to be a "Four Square" with its hip roof popular in the early 20th century. It is actually a Greek Revival period home and older than originally thought. The wide banding and corner boards on the house are Greek Revival elements.
The rear addition to this house is an add-on as there is a break on the eave banding. The second story windows are lower than the main house. The structure may have been the carriage house barn, turned and attached to convert the home into a two family residence. The 1882 Birdseye View map of Andover Center clearly shows the original gable roof house with rear ell and barn. It has been replaced with the hip roof for a more updated appearance.

Two houses now occupy the lot at 37 High Street. The 1906 map of Andover shows the A. Bliss home with an attached barn to the rear. The property was sub-divided to create the lot to the north at #39 High St. in 1907 by Alfred M. Colby. Andover Townsman - Sept. 1, 1911 - A.M. Colby is tearing down the barn behind his house on High Street with the purpose of building a dwelling house there.

This property was once owned by Daniel Saunders when sold to Joseph R. Millett on April 7, 1845. Joseph Millett was a carpenter and most likely built the first house on the lot. Millett took loans from Daniel Saunders and Eleazer Austin in 1845 but became insolvent in 1848. Saunders & Austin were appointed assignees to Millett’s High St. property. They then sold to John J. Brown on Jan. 1, 1848 with all buildings there on parcel 2 in the deed.

John Brown would transition from watchmaker to Apothecary and Confectionary, selling his watchmaking business to John E. Whiting in 1868. John’s store also held the 2nd telegraph office in town. Arthur Bliss was the operator who would later marry John Brown’s daughter Annie Haven Brown on Sept. 21, 1876.

May 23, 1884 AA pg. 3. John J. Brown & Co. are fitted up in fine shape at their new drug store, on Main Street. The fixtures are new and the medicines fresh. The firm consists of John J. Brown and Arthur Bliss, both of whom are well known in this community. Bliss is the telegraph operator.”

John J. Brown died on June 30, 1885 at the Danvers Sanatorium of Paralysis and chronic brain disorder. Arthur Bliss would take over his father-in-law’s business. Arthur Bliss purchased the Brown house on Feb. 26, 1887.

Arthur Bliss was born Aug. 22, 1855 in Marblehead, MA, son of Horatio Arnold & Persis Messer (Morse) Bliss. John had an older sister Arabella. His father Horatio had a fruit business in Brooklyn, NY, but died age 21 on Jan. 13, 1863. Widow Persis and two children would move to Andover. Persis was born March 12, 1823 in Methuen, dau. of Amos & Sally Morse. Son Arthur would later apprentice with John Brown while working the telegraph office.

Alfred M. Colby b. 1858 in New Hampshire was a carriage painter, lived in Lawrence prior to Andover. He owned an Auto painting and fur storage business at 45 Park St. Married to Margaret B. to which he deed the home to in 1915. Alfred subdivided the house lot selling off the lot to the north to Margaret English who built a home at #39. The 1910 census lists Colby at #37 with son Lawrence age 16 and Luther & Pearl Kenyon with 1 year old son Alfred renting. Luther was a conductor on the Railroad. In September 1911 the barn was razed and the second house built behind the main house.
1920 Census list two houses now on the property. Pearl now age 36 has two sons Alfred 11 and Sherwood 5. They are listed at #37R. At #37, the new front home are the Colbys and Andover Police Chief Frank M. Smith age 66 and wife May.

Paul L & Jacqueline F. Monette purchased in Mar. 6, 1953 and also owned four years. Paul was the delivery manager for Cross Coal Co. in Lawrence. They had two sons. Paul Jr. b. 1945 attended Phillips Academy, became an author, wrote “Borrowed Time, An AIDS Memoir” (1988) and “Becoming A Man: Half a Life Story” (1992). Son Robert b. 1951 had spina bifida, was well known to residents in the town center. He attended the Marland School on Main St. and Andover High School 1969.