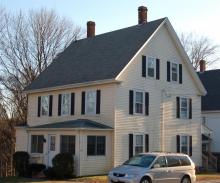 Themes Architectural, Community Development and Industry. This area is known as "Abbot Village" and part was developed by Smith & Dove Manufacturing Co.with housing for its employees.

John Chandler purchased from Amos C. Abbot on Feb. 23, 1869 for $6500 two parcels of land. The first contained 2 acres across from #51 Red Spring Rd. east of the street and down to the Shawsheen River. The second parcel contained 75 acres, “with buildings north of the road being Amos Abbot’s Homestead farm and being the entire premises conveyed to me by deeds of Job Abbot (his father) in two parcels.” The land contained the three houses at #51, #53, & #55 and a barn.

The Chandler’s occupied the house at #51. John was originally a farmer but began a wood and coal business in 1870. At age 70 in 1882 he sold his business to his son George. Chandler rented out the other two houses on property. The David Bruce family had occupied #53 since 1870 and later Chandler sold to Bruce #53 and #55, the old Capt. Abel lot, in 1885.
Chandler’s 2½ acres across the street from his home, were sold off at auction for house lots in July 1887.

The following notice appeared in the Andover Advertiser AA; John Chandler farm.
“Will be sold at public auction on Saturday, July 9th at 2 o’clock P.M. on the premises; six house lots, 100 feet front by 200 feet deep containing from one-third to one half an acre, situated on the south side of Mineral St. in Abbott Village near the residence of John Chandler. Within three minutes walk of Andover depot, less than one mile from Phillips Academy, one half mile from the High and Grammar schools. Conditions of sale, $25.00 at time of sale, balance in thirty days when deed will be given.
Also the following articles of personal property. Two good team horses, weighing 1200 lbs. each, sound and kind, one set double team harness in good order, one two horse wood wagon, one market wagon, one tip cart for one horse one mowing machine, etc, etc.”
John Chandler, Samuel G. Bean Auctioneer.
It appears that two lots were sold on that day, one to Joseph Midgley #54 & #60 & #64 and to Mary Mahoney, wife of John Mahoney at #58. The Midgley purchase would three years later be purchased by John Hickley #54 and John Bain #60 & #64.

John and Phebe moved from the old homestead to a house on Chestnut Street formerly occupied by W.E. Gray. The Townsman reported at the end of May that the house would be occupied by William Angus and William Greig.

38 – 48 Red Spring Rd.
Catherine Clark, wife of Justin Clark purchased two large lots from Chandler on May 9, 1891. Justin built the two family home at 38-40 Red Spring Rd. (formerly named Mineral St. until 1904) the rest of the lot included land at #42-44 and #46-48.
Aug. 16, 1895 Andover Townsman (AT) - Real Estate Transactions p1; – “Justin E. Clark is to build a two-tenement house on his vacant lot on Mineral Street. The batters are up and work will begin right away. (#38-40)
Thomas David, overseer at the Smith & Dove Mills, has also bought a house lot on Mineral Street (#61) adjoining the Bruce property and owned by Peter D. Smith.”
AT p. 4 Abbott Village – “Contractor Sewell has Justin Clarks’s new house shingled and about clapboarded.
Thomas David has decided not to erect a house on his land this winter.”

Justin Clark rented the apartments to operatives in the local mills. Clark then sold the property to the Smith & Dove Manufacturing Co. on April 16, 1897..
Apr. 17, 1897 p.1 AT - The portion on the east side of Mineral Street belonging to Justin Clark has been sold to the Smith & Dove Mfg. Co. The sale was affected through Roger’s Real Estate Agency.

Smith and Dove acquired several properties in the next 20 years for the convenience of their workers. Apartments were rented out to operatives of the mill first, then to any resident.

The Smith & Dove Co. was purchased by the Ludlow Co. in 1927 the holdings were parceled off and sold to private residents. Smith & Dove placed the housing units into the Smith & Dove Tenement, Inc, and sold through that name. It was soon changed to Andover Homes, Inc.

The property was sold to Robert J. & Janet M. Boush for $13,500. on June 11, 1966. Robert was a firefighter with the Andover Fire Department. They previously lived on High Street. Boush had the home for seven years then sold to Richard L. & Joan C. Bealieu in Nov. 1973.

Richard Bealieu was a letter carrier with the Post Office. He died on April 11, 1985 and his wife Joan inherited the home. Joan placed the property in the Bealieu Realty Trust in Mar. 1993 and updated the trust again in Sept. 2007. On Aug. 18, 2010 Joan sold the property to Richard N. & Gina Mazzarese, who have it in trust via the "38-40 Red Spring Realty Trust."