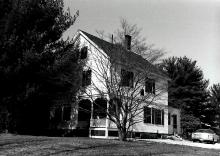 The town built this Queen Anne style home just west of the pumping station in 1892. It was constructed by Henry Bourdelais, a local carpenter, for $1878.10. The house was built as a residence for the Chief Engineer running the operations of the new Andover Water Works built in 1889. The coal powered steam pumps required round the clock attention and an employee close by to maintain a smooth operation to distribute the town's water supply.

The first engineer to occupy the home was George Washington Spickler b. Dec. 1854 in Ohio, Engineer at the Andover Waterworks in 1892-1926. Married on March 8, 1888 in Cook Co. Illinois, to Harriet “Hattie” Cook and had two daughters; Carolyn b. Nov. 5, 1889 in Janesville, Rock, Wisconsin and Lois Ann b. July 19, 1892 in Ohio. George and his family were the first occupants of the new Queen Anne style house built for the Water Works engineer at 397 Lowell St. in 1893. George served as the engineer of the Water Works for nearly 35 years prior to his death in 1926.

3. Howard Everett Pillsbury [1926-1938?] B. June 10, 1890 in Georgetown, MA son of Harland F. & Hattie F. (Powers) Pillsbury. Howard was a Fireman in the US Navy when he married on July 3, 1911 in Somerville, MA to Bernice Elmore Wyatt b. 1896 in Plaistow, NH, dau. of Howard T. & Effie B. (Mellon) Wyatt. They had a daughter Isabell O. b. 1916. Pillsbury was then appointed by the town to assumed the duties of the pumping station after George Spickler’s death. In the 1930 census he is listed as master engineer at the Wood Mill. Howard may have done double jobs during his time at the station.
Howard is no longer listed in the 1938 Directory.

The 1940's Charles T Gillard was the Superintendent and Engineer for the Town but lived at 28 Chestnut St. Edward R. Lawson was the Superintend of the Public Works during this period and lived at 51 Maple St. Philip E. Rollins is list in the home in 1947.