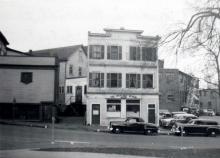 This small narrow lot has been in use for as long as the Andover business district was established in the 1840s. It was once just the side yard of the Capt. James Stevens house that once stood on the site of the bank parking lot. A small one story store was first built here in about 1845 and was used as a retail store. The first store was destroyed by fire and a new structure soon replaced it. A variety of businesses were established here. In 1890 the Andover National Bank sold the lot at auction to Dennis Sweeney, a local blacksmith. The existing store building was moved off the site to the rear of the Stevens house.
Sweeney hired Hardy and Cole, Andover contractors, to build his new boarding house and restaurant in 1892. Sweeney then rented the building to proprietors for the boarding house and the restaurant. Dennis Sweeney later built a fine home for his new family at 22 Central St. in 1900.

EARLY TENANTS OF FIRST BUILDINGS;
The Andover Advertiser newspaper, first published in 1853 advertises the following early merchants at this location;

Sept. 30, 1854 AA– Adv. West India Goods – Sylvester Merrill – Meat & Vegetables –
has taken the shop near the Post Office, opposite the Baptist Church formerly occupied
by Enoch Abbott. (Merrill has been in business for thirty years.)

Sept. 13, 1867 AA - James Johnson has removed his boot & shoe establishment from School Street to No. 1 Central Street, opposite the Baptist Church.

Oct. 29, 1869 – Jonathan Swift has bought from Nathaniel Swift, the strip of land on Central St., lying between his house and the land recently purchased by James Johnson. Improvements long needed will be made upon the premises.

IMPERIAL HOUSE BUILDING - 1892-1950
May 16, 1890 AT pg. 4
The land and buildings on Central Street, opposite the Baptist Church, owned by the National Bank were sold at auction on Saturday afternoon for $2450. Dennis Sweeney, the blacksmith, being the purchaser.

Dec. 24, 1891 AT p1. Dennis Sweeney is to erect a new building, where the fish market on Central Street stands. It will be a two story building, to be used for a store and tenement.

March 11, 1892 AT The building formerly occupied by T. J. Farmer, on Central Street, has been moved by Wilson, into the vacant space in the rear.

July 8, 1892 AT The new building which is nearly completed for Dennis Sweeney on Central St. has been rented by Thomas Murphy, baker, and not to Allan Hinton as was reported some time ago.

July 29, 1892 AT Thomas Murphy has opened his new store in the Sweeney building on Central Street. He will continue his Main Street place at the same time. The former place will contain a restaurant, where regular and transient boarders can be accommodated and he will also have rooms to let. A handsome new soda fountain has been placed there and the whole place is neatly arranged.

Sept. 9, 1892 AT The Davis family, who have lived in Sweeney’s block on Central St. have moved to the western part of the state.

April 21, 1893 p.4 AT It will be Wiggin’s Restaurant – Thomas Murphy has sold his restaurant and boarding place on Central Street to G. W. Wiggin, formerly of Lowell, but recently of Lawrence. Mr. Murphy finds that his store and bakery business on Main Street needs his entire attention….

Sept. 29, 1893 AT -Mr. Wiggin, the well-known caterer has commenced to serve hot lunch at Punchard.

June 28, 1895 AT p1 – Geo. W. Wiggin, caterer, will on Aug. 1, move to the Brick House on the Hill, a student boarding place, which has been conducted by A. B. Wiggin. Mr. Wiggin, it is understood, will continue his ice cream and catering business. His Central Street place has been disposed of to Mr. Ashness of Marland Village.

Oct. 16, 1896 AT p1 The restaurant on Central Street known as the Imperial House has again changed hand, having been purchased by Albert Fagerstrom, coachman for Col. Ripley. The new proprietor took charge yesterday and will continue on the same plan as run by Mrs. Murphy.

June 4, 1897 AT – Proprietor Fagerstrom of the Imperial House, furnished an excellent dinner for the cricket club on the grounds Monday.

July 8, 1898 AT P1. Barnett Rogers will sell at public auction the household furniture in the boarding house known as the “Imperial House”, on Central Street, Sat. July 16, at 1:30 pm.

July 22, 1898 AT p1 The furniture and fixtures at the Imperial House were sold at public auction by Auctioneer Rogers last Saturday afternoon..

Sept. 14, 1900, AT p1 The Imperial House has changed hands again. The proprietor, Thomas Murphy, having sold out to Lawrence parties.

April 1907 The Imperial House on Central Street is now being conducted by Mr. & Mrs. Frank E. Ward. Mrs. Mary Judge has had charge for some time past.

July 5, 1907 AT - William Lowe of North Billerica has purchased the Central House, formerly the Imperial House, from Frank Ward and took possession on July first. Mr. Lowe lived in Andover about 20 years ago and has many friends in Marland Village where he formerly resided.

Sept. 27, 1907 AT A good looking place, is the comment of those who have gone the “Elkhart Hotel” on Central Street for rooms and board. The management of the hotel has changed hands and W. H. Lowe the new proprietor is doing everything he can to satisfy the public wants in the way of food and bedding. The boarding house has under gone a thorough renovation and improvements have been made in a number of ways. This winter Mr. Lowe expects to have steam heat put into place and everything has been done to make it homelike and attractive. [William H. Low later moved to South Boston and died Feb. 10, 1913. and was interred at St. Augustine Cemetery. His obit. mentions .. "Mr. Low lived for many years in Marland Village and was employed in Marland Mills. For a few years he conducted the boarding-house and dining-rooms on Central street known as the Elkhart House.]
Sept. 1, 1911 AT. - "The Elkert Sold" - Wm. Lowe sold to Mrs. Julia Eastwood.

The "Imperial House", as it was most commonly known, continued to be a boarding house through 1940s. It was purchased by George P. Christie in Nov. 24, 1944 and then sold to the Andover National Bank in 1947. The bank razed the building in November 1950 to make way for a parking lot for the bank employees and customers.
It is now the site of the drive through teller area of the Bank of America.

A variety of stores continued to occupied the former restaurant space.
Millers Shoe Hospital 1916 - 1919, Henry Miller had established his shop at 10 Bartlet St. in 1914 with partner Alfred Robb, later relocated 6 Central Street before moving to the Swift Building at 41-43 Main St. 1919-1927.

Elias Essian's Shoe repair was located here in 1926 but then moved to Essex St.
Chin Sewey Laundry was relocated to 4 Central Street from the rear of the Musgrove Building. Chin Sewey 55 and Henry C. Shue 42 were both laundrymen ad are listed here in 1926. Sewey remained here until World War II. The store being vacant in 1943.
in 1945 The What Not Repair Shop owned by Charles Francis of 24 Central St. was here and the name is on the building when is was about to be razed in November 1950.