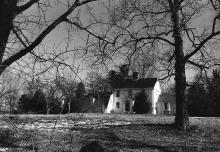 This property was once part of the Pearson Farm on Main St. located where the new Phillips Academy hockey rink complex was built. The farm was acquired from Margaret W. Pearson in 1922 by Arthur Sweeney and then the Trustees of Phillips Academy . This parcel "lot B" , and lot "C" was the southwest portion of the Pearson Farm and was sub-divided into three lots, the greater portion "lot A" remaining with the farmhouse lot at 254 South Main St. The Trustees of Phillips Academy created the sub-division with deed restrictions as to number of homes built and reserved right to purchase back at time of sale.

The two lots B & C were then sold to Helen K. McLanathan, wife of Frank K. who were residing at 111 Main St. at that time. It appears the the McLanathan family built the home at 10 Bancroft. Rd. Guy Lowell is the attributed architect of the home. Guy Lowell also redesigned the Phillips Academy Campus in the mid 1920's. The 1926 Andover street directory lists Frank & Helen at the Bancroft Rd. address. Frank had a leather business in Lawrence, MA. In 1935 McLanathn had moved to Lawrence, temporarily and the house was leased to Vasco & Edith R. Nunez, a manufacturer from Nashua, N.H.

McLanathan then built the Colonial Revival home on lot B. to the rear of this property in 1936, now #4 Bancroft Rd. This house was built as a Colonial reproduction. The McLanahans are residents in the home in the 1937 Andover Street Directory. McLanathan family owned this home for 30 years. The estate was sold to David R. & Anne T Kneeland on Jan. 27, 1961. Dr. James W. & Mette K. Skillings purchased the home on Apr. 5, 1966 and owned for 35 years. The property was sold in 2001 to James D. Berberian and the lot was sub-divided 2005. The house was moved in the Spring of 2006 and turned 180 degrees to face east. The garage and bedroom above were razed at the time of the move and new wings added at the new site.