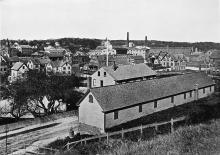 On this site was built a multi-family tenement house for workers of the Ballard Vale Mill Co. established by John Marland. The apartment building was referred to as the long wooden dwelling and in deeds called the "Long Block". Dr. Poore says, "long block of River Street" was built 1844 to suffice needs of growing work force at Ballardvale Mills.

No contemporary photo of the front of the building has yet to surface but an image of Ballardvale Center taken from High Vale Lane in 1895 clearly shows the rear and roof of the long apartment building. Note the staircase to High Vale Lane, previously called High Street and renamed in 1990.

This property was deeded to John Marland's father, Abraham Marland on March 18, 1848 via a $20,000. loan. With the death of Abraham Marland, on Feb. 20, 1849, his estate acquired the property and son-in-law Francis Cogswell, the last surviving Trustee of the Marland estate later sold this parcel to Josiah Putnam Bradlee of Boston, MA for $1600. on November 2, 1863. The deed states ...also the long building opposite and easterly of said Store occupied as tenements and a Tailors' Shop together with the lot of land connected there with and adjoining the same,....and is 156 feet on the east side of River Street.

J. Putnam Bradlee was the treasurer of the Ballard Vale Mills Co. "from January 15, 1842, through all the changes and various phases of its history, until he became sole proprietor in 1866." Bradlee was connected with the mill for nearly 50 years.

July 23, 1880 - Andover Advertiser - Ballardvale - "The store of F. G. Haynes & Co. has been raised and the work is nearly completed. An Addition is now being built on the south end. 20 by 24 feet, which will be used for storing goods. The long building opposite in entirely remodeled. and furnishes cooking and store rooms and the upper story is to be occupied for a hall and Bowling alley. The carpenter work is done by Hardy & Cole."

J. Putnam Bradlee died on Feb. 2, 1887 and his trustees of his estate were William L. Strong and William H. Hodgkins. His estate was setup as a trust for his sister Helen C. Bradlee of Boston. After her death the estate was sold off. William H. Hodkins then sold most of the remaining holdings to the Ballard Vale Mills Company on Feb. 6, 1905. This parcel is the sixth parcel mentioned in the deed, referred to as lot #20, containing 18,360 sq. ft. The deed also mentions the use of the well on the property. In the period a well pump is clearly present on the south end yard of the property.

C. Lincoln Giles, a local developer, architect and property re-haber, with Fred E. Cheever, a Realtor and developer, purchased the property on April 5, 1968 and placed it into the 1700 Estates Trust. At a special Town Meeting in October 1970 the Town of Andover acquired the property by eminent domain. The property has remained a vacant lot since that time.