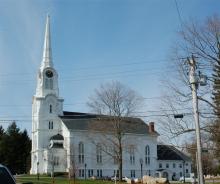 Other features:
South Burial Yard at rear, established in 1712 - oldest gravestone extant 1723;
Only church in Andover with a clock tower

Historical significance: Nov. 2, 1708, Andover was divided into two parishes by order of General Court. Resident of the South End of town complained that the distance was too great to attend services at North Parish Meeting House and growth of town necessitated a second meeting house of worship.

First South Parish meeting house built 1710 - 1711, Samuel Phillips, minister. First building "at ye rock on west side of Roger's Brook" - [The rock here mentioned was near the site of the present Centre School House, and was removed in the year 1844.p. 27 Historical Manual of South Church InAndover, Mass, 1859] The school house was located on the open lot to the north of the church near the playground.

The third meetinghouse was larger still, needed to house the expanding congregation. There was however great discussion as to where to build the new meeting house as many parishioners were in favor of a site on the west side of the river. It was built next to the old one. "The dimensions were to be seventy feet in length and fifty-four in width", "with a porch at each end and one in the front of the house." The frame was raised on May 26 & 27,1788 and the first service held on Dec. 7, 1788. It remained in use until 1861 when replace with the present structure which at this date is 153 years.

In 1826 the South Parish was divided again for much the same reasons as the first division and all residents west of the Shawsheen River became charter members of the new West Parish Church and built their stone church that year.

In 1845 with the anti-slavery movement and abolitionist issues, some members of both the South and West Parish Churches left to create the new Free Christian Church.