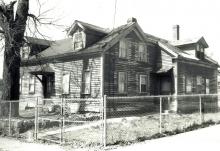 This empty lot at #41 Pearson Street is now as a second access road into the Town Yard on Lewis St. and was parking for the former Youth Center housed at #39 Pearson St. On April 4, 1988 at Town Meeting, article #26, the town took by eminent domain the Old Culley - Stack Homestead for expansion of the town yard. The intention by the town was to raze the old home but a fire in the building on Oct. 27, 1989 hastened the demolition of the historic structure.

Pearson Street was named for the Rev. Eliphalet Pearson, L.L.,D, born 1752 in Byfield, Newbury, MA, graduate of Harvard in 1773, taught at Andover Grammar School in 1774, first Principal of Phillips Academy 1778-1786. In 1806 he helped found the Andover Theological Seminary. Pearson moved to Harvard, MA in 1820 and died on Sept. 12, 1826.
The property on Pearson St. was once owned by Eliphalet Pearson and the street or way is referenced in 1830 deeds. Pearson's land in Andover was sold by Ephraim Abbot and Stephen Gardner, Trustees of his estate,.

It should be noted that the B&M Railroad had not yet been built, opened in 1848., but the Andover - Wilmington Railroad line 1838-1848 did cross on the upper east end of Pearson Street.

This was Culleys' home until his death in 1865 at age 69. Mathew's will gave Rebecca her choice of any bedding and bedstead in the house. The house and contents were to be sold at auction, all debts paid, and the remainder of the estate was to be placed in Trust for Rebecca. She would receive an annual income of $120. "for her comfort and support", to be paid semi-annually. Culley's estate totaled $25350.80 Joseph Rice, Executor and Trustee, died before Rebecca and E. Francis Holt was later appointed Trustee to her estate. Mathew Culley in interred in St. Augustine's Cemetery. After Rebecca's death the estate was to be divided into 10 equal shares. Seven shares were to go to his cousins living in Ireland, children of his uncle John Culley. the remaining three shares went to cousins Ellen Murphy, wife of Patrick and Margaret Roach, both of Andover and his Uncle John Culley.

Joseph Rice sold Cully estate on Aug. 26, 1865 at auction to Louis M. Edge of Lawrence for $1700. Edge owned the house four years. It appears that Edge rented the house to the widow Rebecca Culley as she is at this location in 1865 State census. Also in the house is Margaret Roach, age 40, an operative, and William Higgins 46, operative, wife Susan age 40, Catherine 23 and Jane 19. Rebecca Culley died on Jan. 1, 1869 of Consumption age 69y 4m.

In the 1870 census half of John’s children are employed; Ellen 18 and Thomas 16 are working at Smith & Dove. John 15 is at Marland Mill. The three youngest are in school. By 1880 on three remain at home, John 23 is now a Finisher in the flax mill, Michael 22 a Carder and Elizabeth 18 a Spinner all at Smith & Dove.

The Stack property extended to the Boston & Maine Railroad on the west and the lot that now holds the two-family home at #37-39 Pearson St. The new two family apartment house at #39 was built by the Stack family about 1898 and remained in the family until 1948.

This property, Parcel B, appears to have gone to son John J. Stack born in 1895 and remaining Stack heirs. Joseph P. & Placida O. Stack then held the property at the time the Town of Andover purchased the property by eminent domain on April 12, 1989 - Parcel B - #41- #43 Pearson St.