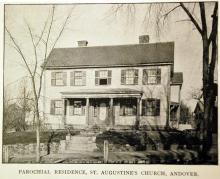 It should be noted that the B&M Railroad had not yet been built, opened in 1848., but the Andover - Wilmington Railroad line 1838-1848 did cross on the upper east end of Essex St. to the rear of Memorial Hall Library and crossed Pearson Street when the line extended to Haverhill.

The property at this end of Essex St. and Pearson St. was once owned by Eliphalet Pearson. Pearson's land was sold by Trustees of his estate, Ephraim Abbot and Stephen Gardner. John Merrill purchased four lots for $219 on Mar. 9, 1831. Lots 1-7-8-9 on the present day Essex St. & 8 & 9 forming the triangle at the bottom of Pearson St. Joshua Ward of Salem, MA also purchased land from the Pearson estate on Dec. 25, 1830 for $1267 which included five parcels along Pearson St. and Essex St. and abutted Merrill's lots. Ward held lots 2 & 3 on Essex and 10 & 11 on Pearson. Ward's deed was recorded on Feb. 26, 1835.

Lots #1 & #7 here on the north side of Essex St. and Lot #2 make up a portion of this property today and was the site of the Corse House and second St. Augustine's Church building. Joshua Ward drew a map plan on the back of a deed showing nine lots with the owners names. (see b. 260 leaf 144 Salem, Deeds)

Crowther sold this property to M. Christopher Andrews on Feb. 12, 1846 for $1800 which included "with buildings". Crowther moved to Norwich CT, and died Oct. 13, 1862. Son James A. fought in the Civil War, 8th Infantry, CT. All are interred here at South Parish Cemetery.

June 14, 1856 AA – William Corse just opened a store under the Baptist Church. – Gentlemen’s Boots, shoes, & Gaiters – Ladies’ cloth gaiters, French shoes, slippers, all kinds of repairing done.
March 28, 1857 AA - William Corse – Boots, Shoes and Rubbers – basement of the Baptist Meetinghouse.
May 27, 1865 AA – New Shoe Store – Wm. Corse has taken the shoe store in the Town House, formerly occupied by D. Howarth.
March 22 1867 AA – John T. Shattuck has sold out his stock and trade to Messrs. Corse & Townsend, who will continue the boot and shoe business trade at the old stand. Co-partnership formed. Corse & Townsend will carry on the boot & shoe business at the store in the town house, and also the store in Beard’s building on Essex Street. [#8]
June 21, 1867 AA Henry W. Abbott is about fitting up a store in the south end of his brick building on Main Street, for Messrs, Corse & Townsend, These gentlemen will unite the boot & shoe business of their two establishments in the new locality. (new co-partner Milton B. Townsend) [Brick Building at 1 Main St and Elm Sq.]
Shattuck’s store was at 10 Essex St. was in the Swift - Beard building and Townsend managed this store until they merged both into the new brick building location at 1 Main Street.
Sept. 25, 1868 AA – Messrs. Corse & Son keep a good assortment of boots & shoes at their store on Main Street. A supply of Zephyr overshoes manuf. by H.G. Tyer of this town, an excellent article for the ladies.
May 12, 1871 AA – William Corse & Son dissolved their business partnership [William Corse & William A. Corse] New co-partnership Wm. Corse & C.A. Stevens in “Corse & Stevens”
June 6, 1873 AA – Co-partnership of Corse & Stevens – dissolved – Now continued by Charles A. Stevens at the old stand on Main Street. Boots & Shoes shop.

July 9, 1875 AA - William Corse has sold his land and buildings on Essex Street to Father A. A. Mullen. James Howarth executed the deed transfer from Corse to Father Mullen on July 12, 1875. As the property contained the William Corse home, the deed stipulated that Corse had use of the east side tenement rent free for the remainder of the year and a Mr. Osborn, renting the west side tenement, could continue to rent for the same period of time.

The Crowther - Corse house would then become the Rectory for the Priests of the new St. Augustine's Church which was built on the next lot east of the house in 1879.
St. Augustine's church formerly on Central St. relocated to 43 Essex St. in 1879 to a more central location for the parishioners. Rev. Ambrose A. Mullen OSA, had been the Pastor of St. Mary's Church in Lawrence, and past President of Villanova College in Pennsylvania. He lived at 29 Pearson St. prior to moving here. Sadly Father Ambrose A. Mullen died on July 7, 1876. Rev. Maurice J. Murphy, O.S.A. continued Rev. Mullen's work and "set about building a permanent church, a wooden structure on the site of the present (brick) rectory."

June 27, 1879 AA – "Father Murphy was seen one morning this week, pick in hand, working with the laborers on the foundation of his new church on Essex Street. The work of putting in the foundation of the new Catholic Church on Essex Street is progressing rapidly. The structure will be of wood, 60 x 80 feet, seats for six hundred persons. The expense will be about $10,000 and the building it is expected will be completed by Christmas."

Father Murphy was succeeded by a priest of equal zeal in the fall of 1886, by the Very Rev. Jeremiah J. Ryan, O.S.A. who remained until July 1894. The Very Rev. Thomas A. Field then began his work for the parish. Rev. Field was born on Feb. 5, 1828 in County Cork, Ireland. He was educated in Ireland before coming to America. He attended Notre Dame University, in Indiana, the Villanova College in Penn. He was ordained on Apr. 2, 1875 and his first church was St. Mary's in Lawrence. He served in up-state NY before coming to Andover. During his pastorate Rev. FIield painted the exterior of the church, now ten years old, affixed a new copper cross to its steeple, and made other improvements. The church however, caught fire and burned to the ground on November 8, 1894.

Andover Townsman - Nov. 9, 1894 - p. 4 Early Morning Blaze. - ... a servant girl at the parsonage first discovered the firs and arose Rev. Fr. Lynch, Fr. Francis, the pastor, being in New York.....12:45am ... started in the northwest corner of the building under of near the robing room....the tower fell in about 2am, it was about 75 ft. in height. The parsonage was scorched a little on the side nearest to the church, while the Gunnison house, on this side (east) was damaged slightly. From both of there places the furniture was moved out."

..."although there was no frescos to embellish the interior, nevertheless, there was that finish and plainess about it that would gain the approbation of the most critical. The walls, columns, tracery, arches, and groins, being entirely white, were enhanced in beauty by the sun's rays reflected through the stain glass, and the monotony of the interior simplicity was greatly relieved by the stations of the cross and richly decorated alter." (History of Catholic Church in New England).

The Parish built the Rectory house in 1904 and houses were moved to Pearson Street. The former rectory was moved to filling station. This would have been #4 - #6 Pearson St. The old Rectory was replace in 1905 by the current brick Rectory to the east of the church.

AT Apr. 8, 1904 – p.1The property of St. Augustine’s church on Essex Street is for sale and must be removed at an early date to allow the building of a new parochial residence, for which plans are underway. This property consists of two houses and one barn. AT May 13, 1904 – p1. The parochial residence of the St. Augustine’s church has been removed to the lot on Pearson Street owned by P. J. Daley and will be repaired and renovated for a double tenement house. Work will begin on the new residence for the pastors within a short time.

p. 4 The stable adjoining the St. Augustine’s parochial residence recently purchased by P. J. Daly is being moved to a location in the rear of the latter’s store.