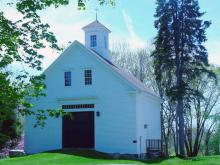 structure: barn
This barn is a classic New England style barn with gable end to the street. The proportions of the main barn and cupola on the roof emit a graceful symmetry and scale on the property. The white and green trim color scheme also contribute to a regional trend and taste of the period.

The house lot was divided off and sold to Kenneth E. & Susan A. Williams. At this time the lot that had included the barn and shed located on Clark Rd. and the house facing Dascomb Rd. was divided into three separate house lots. Williams purchased the Clark Homestead on lot #1. Lot 2 contained the barn and shed and lot 3 was vacant. Lot 2 was purchased by James J. Philben. The barn was saved and restored and a new home built to the north of it.

Roger M. & Margo R. Turpening purchased the property on Nov. 10, 1978. The Turpening family were owners of the home and barn for 36 years.
The Andover Barn Survey was conducted in 1988 by the Andover Historical Society and the Andover Preservation Commission. The former Nathan Clark barn was then designated an historic structure and a architecturally a significant structure of Andover's former agricultural history. The property was first added to the Andover Building Survey in 1975-1977.