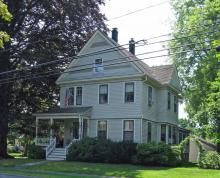 David Burns died on Aug. 6, 1880 at age 36. 49 Summer St. was the first of several properties acquired by Annie through the years that followed. The home was built by the Burns family shortly after the purchase of the lot. He sons William Joseph and David S. would become tailors. William J. worked for Joseph M. Bradley and Paul Hannon, two of the best tailors and merchants of men's where in Andover at that time.

In March 1896 Joseph M. Bradley sold his business to William J. Burns & M. J. Crowley and established Burns & Crowley. It was described as, “The handsomest tailoring and gent’s furnishing goods store in the state.” They were also agents for Scriptures Laundry. The two men had worked in the trade under Mr. Bradley & Paul Hannon.
Jan. 24, 1896 AT p5 New Tailoring Firm – Burns & Crowley is the name of the new firm. Conducted by Joseph M. Bradley – March 1 – Bradley to open a new store in Lawrence, - long article about who worked for who.
April 17, 1896 AT – p1. Jos. M. Bradley has sold the building on Main Street, now occupied by Burns & Crowley and the Cutshamache Club, to John Ford of Lawrence. This building is 13-15 Main Street.
When Crowley left the partnership in 1899 the store became the W. J. Burns Company and continued at that location until 1949. Both William and David S. managed the store. Michael J. Burns never married and remained in the Summer St. home with his mother. On Apr. 7, 1919 Annie Burns deed the house over to Michael.

Annie died on Feb. 11, 1926 at age 83. The three business properties were then placed together. and held by both brothers. William J. Burns died on June 5, 1939 age 69. His brother David Burns inherited his estate and the family business.
David Burns married Florence May Souter b. dau. of James & Mary (McCaslin) Souter of Andover. They first lived at 81 Chestnut St. then moved to 14 Wolcott Ave. They had three children; Florence, Nancy and David Burns Jr.

David Sheridan Burns died on Aug. 22, 1952 and his estate was placed in the Florence M. Burns Trust. The Burns family are interred at St. Augustin's Cemetery on Lupine Road, Andover, MA