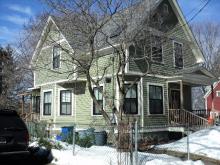 5 Hartigan Court – 38-79 – 0.385 acre, 16,790 sq. ft. Mary & John Sweeney – David Hartigan House
Map plan #1539 – May 1945 – John J. Hartigan
Hartigan Court is actually a former section of the old Andover – Wilmington Railroad line to Haverhill 1838-1848. The Andover Depot was on Essex St. at the rear entrance section of Memorial Hall Library. The line crossed Main St. near the public safety center then connecting at High and Harding Streets. High St to North Andover center was the original railroad bed and converted into a roadway in the 1850’s. Boston & Maine Railroad purchased the line and moved the tracks to the current location in 1848 to bring service to the new city of Lawrence. The properties on Hartigan Ct. was acquired by Burnham White who lived at 66 High St. and pieced together several lots in the 1850s.

Son John Jr. would also become a plumber. Daughters, Mary F., Annie and Catherine were telephone operators. Catherine who become Supervisor of the N.E. T. & T. Co. office in Andover in the Musgrove building. The Sweeney’s owned the home for 12 years then moved to 32 - 34 Chestnut St. after selling to Daniel Hartigan on Sept.24, 1916.

Sons; John J. was a physician and Daniel, a pharmacist, opened Hartigan’s Drug Store in the new K&D Merchant’s Block at 64 Main St. November 1924. The drug store entrance was located on the corner of the block. Handsome mahogany fixtures, a marble soda fountain with mirrored back bar and mahogany & stained glass telephone booth were installed in the pharmacy. Hartigan’s remained the longest tenant closing in the 1978 - (now CVS).

David Hartigan purchased 5 Locke St. on Oct. 20, 1926 and sells all the properties to son John J. Hartigan on Dec. 2, 1935. Wife Mary died on Jan. 4, 1932 and David moved to the Locke St. with his son John and his wife Celeste. This home was then rented to Joseph & Ellen Holland who was an overseer in Reading. David died in 1937. John J. held the properties on the Court until August 1945 when all the lots were sub-divided and sold off separately.

Phillip E. & Virginia T. Thomes purchased the property on Nov. 23, 1953 and owned for 51 years. Phillip E. Thomes was born 1916, a boiler operator. Virginia b. 1922 a housewife. Phillip and Ginny had two children: Phyllis V. ,Andover High Class of 1969 and Frederick C. AHS Class 1972. The Thomes were active members of West Parish Church. Phillips died on Oct. 18, 1988 the Ginny later placed the deed with her children as co-owners with her.

The property was sold on March 9, 2004 to Jonathan S. Wachs, a Photography and Fine Arts teacher at Andover High School. Jonathan, also a contractor, then renovated and restored the house and moved in with his wife Lynn. They had two sons prior to moving to Concord, MA. Wach sold to Doug Nason & Josephine McCarthy on June 6, 2013.