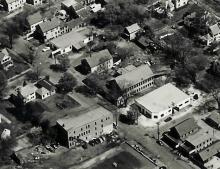 There were two houses on this property, the house at 53-55 was a two story, two family house, with double bay windows on first and second floors flanking center entrances. The second home was at #57, a single family residence occupied by the Nuckley family from 1906-1940. The Nuckey's used the two family as rental income property.

Park Street was constructed in 1873 and development along the street began immediately. No image of this two family home has yet to be found. The third building up from Bartlet St. corner in the aerial photo.

This empty field was once owned by Hannah W. Foster, wife of Joseph W. Foster in 1883. Hannah sold off parcels for development and Thomas Howell purchased this parcel on May 19, 1883. Howell built the brick Howell Block at 10-16 Park St. He owned several lots on Park St. This house does not appear on the 1884 map of Andover.

In 1906 The People's Ice Company was formed by Joseph H. Nuckley and T. Frank Nuckley as owners and managers. In 1899 Joseph Nuckley started an ice business in Ballardvale with one horse and a wagon. He acquired the Hayward ice houses in Ballardvale. In 1901 his brother-in-law William Haggerty became a partner. His brother T. Frank Nuckley bought out Haggerty's interest and the Andover Ice Company was formed.

In 1905 the brothers were bought out by Brooks F. Holt but the following year they returned the the ice business and formed the Peoples Ice Co. In 1914 they merged with B. F. Holt and until 1926 supplied the residents of Andover with ice. In hot weather of the summer, two deliveries were sometimes made and no emergency call, regardless of the time was every denied. As the company grew, it required as many as 24 horses for deliveries. In 1919 they purchased trucks to transport ice from the ice houses up into town.
At the time of their retirement in 1926, they had seven horses, three wagons, six trucks and employed 30 men. During their ownership they owned 131 horses, 50 of which dying in service. Several to which they were especially attached to were kept and set out to pasture.

The ice houses were located at Pomp's Pond, Hussey's Pond on Iceland Rd., and Ballardvale on River St. 10,000 tons of ice were cut yearly in Andover. Ice was also shipped by train in carloads from Milton & Brookline, NH. When demand was at its highest, it might require a carload a day. On October 1,1926 the Nuckleys sold the business to the Metropolitan Ice. Co. It included the all the equipment and the ice houses at Pomp's and Hussey's ponds, except the Park Street property which the Nuckey's retained until 1940.

On May 1, 1940 James Heifitz purchased the property. The 1943 directory lists the property as vacant at #53 & #55 as vacant. but 57 occupied by Charles W. Davis, a bartender at the Town Grill in the Musgrove building. Clark Motors Co., Inc.acquired the property on Oct. 29, 1954. The houses was later razed for additional parking for the car dealership.