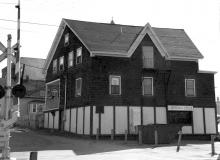 This building was built as a two family residence with space in the basement for a small business. One family apartment was on Pearson St., north side and the other unit on Essex St., south side, with access from the east end of the building.

Early deeds reference Depot House lot. The Boston & Maine Railroad tracks were moved to this current location in 1848 to service the new City of Lawrence. The freight office for the Depot was once located in the basement space.

George L. Abbot, Housewright purchased the property on Dec. 16, 1850 for $500. George L Abbot built the cottage house at #34 Pearson St. He sells the all the property to William Abbot 2nd, a Trader, on Jan. 1, 1852 for $1100. William built this double house with the store in the basement and held it for eleven years. This also included the cottage house.

Andover Advertiser - May 21, 1853 - Daniel Devlan - New Tailor - In the new building recently erected by William Abbot near the Depot.

Smith & Dove Mills were located in the now Dundee Park complex, producing linen thread for carpets, shoe laces and sail cloth. They were one of the largest employers in Andover and needed housing for their operatives. Smith & Dove owned the building for 57 years, renting out the apartments and the store below.

John O. & Mary Elizabeth Boudreau purchased the building on July 19, 1932. The Boudreau family owned for 22 years then selling to John F. Grigas & Stanley E. Grigas on Sept. 28, 1954 who owned for 23 years. Grigas was the owner of Rickey's Variety store. Much like the convenience stores of today, Rickey's had groceries, dry goods, tonic, soda and candy. They also stocked magazines and the daily papers for train commuters. Rickey's had a long lunch counter that ran along the west wall of the store. He advertised the best fried clams in town, but coffee, hamburgers and sandwiches were the main stay.

Harold Morley Jr., County Commissioner was appointed through Probate on Oct. 4, 1977 to sell the property. Ben H. Waters on July 6, 1977, held the mortgage. When Rickey's closed the basement store was gutted and redesigned. Windows replaced the blank wall on the west side bringing more light into what had been a very dark space. Depot House of Pizza opened about 1978 and continues as a popular eatery in 2015.
The upper floor apartments are now used as a Pet Supply Store with entrance on Pearson St. The attic space and apartment.