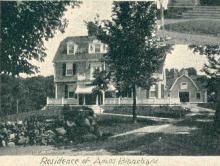 The house was built by Amos Blanchard about 1890 as his residence. Blanchard purchased the 2 Acre 10 1/2 Sq. rod parcel of land on October 4, 1889 form Carrie A. Davis wife of George Davis. Amos and wife Lucretia lived here for eleven years then sold to Edward Higginson Williams Jr. on July 1, 1901.

Edward H. Williams Jr. was an alumnus of Phillips Academy class of 1868. He was born Proctorville, Windsor Co., VT on Sept. 30, 1849, son of Edward H. & Corniela Bailey (Pratt) Williams. Edward attended Yale College and became a Mining Engineer and later a Professor of Mining and Geology. Edward married Jennie Olive Bemis on June 19, 1883 at Roxbury, MA. Before moving to Andover in 1901 they were living in Hanover, Leigh Co. Penn.

When Williams moved to Woodstock Vt. he deeded the property to Phillips Academy. The house was enlarged to triple the size with dormitory rooms added on to the east and west side of the original house in 1922. The main house living space of living rooms, studies and game rooms were for freshman ("Juniors") resident students. It also contained family rooms for the resident faculty member and family. The first resident instructor was John L. Phillips and his wife.

The Academy found the upkeep of the building to costly to maintain and renovate. In an effort to save the building a plan to rent the building to the town for use as a Senior Center was proposed but never materialized. Only the Carriage house was converted to faculty housing and the main house and former barn were demolished about 2001.