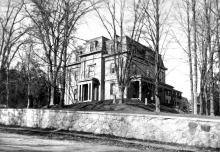 Built in 1847-1848 a transitional style from Greek Revival to early Second Empire with the roof.
June 9, 1899 - AT - The famous Boston Architect, who has just passed away, Gridley J. F. Bryant, was the designer of the P.D. Smith’s house and also that of Mrs. R. B. Mills on Central Street.

The flat board siding, dentil banding, corner board quoins, engaged pilasters, front porch pillars all painted gray suggest a Greek stone temple. Fluted Doric columns support the south porch which would have had a commanding view of the Smith & Dove Manufacturing Co. mills below and the town center above to the east. The Mansard roof is French Empire popular from 1860-1890's. The rear ell was traditional clapboard siding and wood trim.

The former Peter Smith estate “Forest Hill” was once the farm of Elijah J. Herrick in 1821. The 1830 map of Andover lists Herrick on Shawsheen Rd. Elijah was born Nov. 10, 1786, married Hannah Abbot May 9, 1815 and they had ten children. Herrick was a shoe manufacturer and yeoman. Herrick owned property on School and Central Streets and took loans on his five parcels from Ralph W. Jewett of NH, and Samuel Abbott . Herrick would sell to Samuel Abbot on Apr. 4, 1838 and moved to Illinois. Samuel Abbot then sold the farm to Alexander Winning on June 1, 1839 for $3255.

The farm included a dwelling house, barn and 26 acres that stretched from Stevens St. to Lincoln St. Alexander Winning was born in 1818 and married on April 25, 1839 to Mary Ann Murray of Charlestown, MA b. June 18, 1808 dau. of John & Mary (Hayes) Murray. They had two daughters; Mary Elizabeth and Martha Caroline. Winning sold his farm to Peter Smith on April 26, 1847 for $3100 and moved out to Osgood St. The first parcel was 26 acres with dwelling house and other buildings. The second parcel was on the southwest side of the street.

Peter Smith was born Sept. 21, 1802 in Brechin, Angus Co., Scotland brother to John Smith and youngest son of Peter & Jennett (Middleton) Smith. Their father, a carpenter, died on Aug. 1, 1810. Oldest son James, age 17, would provide for his mother and siblings. John Smith b. May 19, 1796 was sent out at age 13 to earn a living as a cotton weaver. In 1816 John immigrated to America, first to Waltham, MA, then to Plymouth, MA where he became business partners with Joseph Faulkner of Andover and Warren Richardson of Medway. John’s brother Peter Smith joined him in 1822. They came to Andover in 1824. bought water rights in Frye Village and set up shop on the east side of the river.

Both business partners died, Mr. Richardson on Nov. 24, 1829 age 35 and Mr. Faulkner age 48 on Aug. 5, 1831. John sent Peter to Scotland to enlist his friend John Dove to join them in Andover. Dove was a machinist and worked with Peter in the Flax mills. Dove arrived in 1833 and persuaded John Smith to begin producing linen thread from flax. In 1836 the Smith, Dove & Co. became the first manufacturer of flax in America. The success of the venture made the men the wealthiest families in Andover by the mid 1800’s.

All Peter’s children reached adulthood and all but three married. Sadly daughters, Lucretia W. and Elizabeth M. both died in their 20’s. Lucretia died on Christmas Day 1865 while on a trip with her father to Scotland. Peter had her remains sent back to Andover for burial in the family lot in West Parish Cemetery. A new obelisk made of Aberdeen granite was shipped from Scotland to Andover to honor her memory. Elizabeth, a diabetic, died on Sept. 21, 1873 age 27. Daughter Susanna never married but was provided for in her father’s will with a life tenancy in the homestead.

Peter was a Deacon of West Parish Church from Oct. 1832 until his death on July 6, 1880. He was a trustee at Phillips and Abbot Academies, a large donor establishing Memorial Hall Library and the Andover Theological Sem. Library. Taught Sunday School, supported Temperance and like his brothers John & James an Abolitionist. He loved children, flowers, all nature and had a keen interest in horticulture. Peter willed the estate to his wife Esther for the remainder of her life. Upon her death the estate would go to his son Peter Dove Smith. Peter notes in his will, that because he asked his son to re-enlist at the end of his duty, and because he was wounded, thereafter, the estate would become his.

Peter D. Smith was educated in the public schools. He joined the Andover Company in 1861, was commissioned as a corporal in Co. H First Mass. Heavy Artillery. Promoted to 2nd Lieutenancy and assigned to Company G. Peter was wounded at the battle of Spotsylvania, he lost two middle fingers from his left hand. Peter married Abby J. Chandler in 1867 and had three daughters; Esther W. b. Nov 8, 1870, Elizabeth M. b. Apr. 19, 1876, and Mary b. Oct. 31, 1878.

Peter D. and Abby moved to Gloucester, MA where he owned a wholesale fish company for Cod and Mackerel and owned several vessels. It must have been a family venture as his father, sisters Susanna W. and Elizabeth M. and brother Benjamin F. were all assessed for Vessels in 1870. With the death of his father Peter D. moved back to Andover and bought the Punchard house at 8 High St in 1882. When his mother died on May 22, 1889 he moved into Forest Hill and sold the Punchard house in 1891. Peter D. Smith purchase 73.5 acres of land across the street from the house from John Chandler on May 19, 1891 including the Chandler home at 51 Red Spring Rd. This property was purchased by the town in Sept. 1955 for the site of the new high school.

Peter D. was very active in veteran organizations at both local and state levels, served as president of the Board of Trustees of the Soldiers Home in Chelsea. He was a town selectman from 1890-1893, Director of the Andover National Bank, a member of St. Mathew’ Lodge A.F. & A.M. At the time of his death in 1910 he was President of the Smith & Dove Company. “ In May 1901, Smith led a regimental delegation that dedicated a memorial monument on the Spotsylvania battlefield. He also, along with his wife and two of their three daughters, visited the National Cemetery at Fredericksburg, where childhood friends — of both Peter and Abbie Smith – were buried. They also had a cordial meeting with a North Carolina man who had been a Confederate sergeant engaged in the same battle.”

The house and estate were too large for the daughters who inherited. Esther Ward Smith would move into the Gardeners Cottage at 63 Shawsheen Road. Sister Mary Churchill and husband Marlborough appear to be the last Smiths to occupy the mansion in 1926. The deed was quit claimed to Esther Smith in 1923 and remained in her control until her death on Oct. 15, 1952. The mansion was shuttered and later razed. Esther Ward Smith never married but was hardly an old spinster. She was an avid sports woman, bagged three pheasants with a single shot, loved horseback riding and became the first woman police officer in Andover. Esther’s sisters Elizabeth M. Clarke and Mary Churchill inherited the estate and began selling off the remaining properties.

On December 3, 1945 Esther W. Smith sold 7.16 acres which included the Mansion house and stable to George F. Dufton, of Dufton Construction Co. in in Andover. The site was subdivided into 24 house lots to become Beech Circle in 1946. Lots 23 and 22 held the homestead now #1 and #3 Beech Circle. Smithshire Estates was planed in 1953. Many the Smith family are interred at the Smith family lots at the West Parish Garden Cemetery on the hill overlooking the Wood lot and chapel.