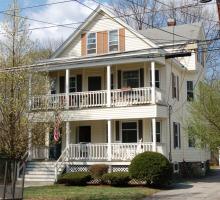 Oct. 23, 1874 Andover Advertiser - AA – John H. Flint is at work on a new avenue leading through his land from Elm Street to Carmel lane.

John H. Flint was a local businessman who married Frances Tyer and lived at 8 Elm St. Flint owned most of the land near his home and created Maple Ave in 1874. The property once was part of the Locke estate at 70 Elm St. Flint sold this property on the west side of Maple Ave to John L. Smith on July 17, 1877. John L Smith's home was at 55 High St. and his property extended to Maple Ave and included the lots 54-56, 60-62 and 64-66 Maple Ave created later.

Maurice J. Curran was business partners with John Joyce under the name Curran & Joyce who bottled soda water and ginger ale and later were liquor distributors. Curran and Joyce lived at 250 North Main Street in the "Croft" the former mansion of George W.W. Dove. These were income properties for Curran. With the death of Curran, the two properties were sold off separately. William J. & Louise A. Stewart purchased this home on Nov. 21, 1938. William was a police officer with the Andover Police Department. The 1943 Directory has them at 58 Maple Ave and in #56 was Arthur J. & Ethel S. Brindle. Arthur worked for the U.S. Bobbin & Shuttle Co.in Lawrence. Their son Arthur Jr. was serving in the U.S. Army during WWII.

The two family house was converted into the Maple Arms Condominium Trust on June 21, 1997. The former apartments then sold as units 1 and 2.