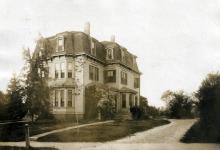 For 45 years residents and students have walked by this empty lot with the knee wall at the edge of the sidewalk and a few steps leading up to an empty, flat, and well maintained lawn. A stroll to the back gives a nice view of a soccer field and Playstead beyond. This site once held this beautiful French Empire home built in 1886.

The land once belonged to Jonathan Towle who sold the lot to Jonas Spaulding of Townsend, MA on April 3, 1886. Spaulding had the home built for his family. Jonas Spaulding was born on Feb. 6, 1833 in Townsend, son of Jonas & Lydia (Nowell) Spaulding. He attended Lawrence Academy in Groton, MA and graduated in 1854. "Jonas Spaulding and his brother Waldo Spaulding started a company in 1873 that made leatherboard. They did business as Spaulding Brothers. Jonas Spaulding expanded further into the leatherboard manufacture founding a second mill at Milton, NH around 1893."

Jonas married on Mar. 6, 1866 to Emma Cummings b. Aug. 28, 1820 in Mason, NH, daughter of Nathaniel & Lucy Cummings. They first made their home in Townsend before coming to Andover. Jonas & Emma had four children; sons Leon b. Mar. 1868, Huntley Nowell b. Oct. 1869, Rolland Harty b. Mar. 1873 and a daughter Marian b. 1879. Leon attended Lawrence Academy class of 1884 and brother Huntley went to Phillips Academy class of 1883. Sons Rolland Harty Spaulding and Huntley Nowell Spaulding would later both serve as Governors of New Hampshire.

Jonas brought his sons into the business organized as J. Spaulding and Sons. Jonas then constructed of a third leatherboard mill at North Rochester, NH that began production 1900 shortly after his death in 1900. Jonas died on Nov. 10, 1900 in Andover, MA.

Jonas' sons were successful with the business and acquired the Spaulding Brothers mill in Townsend Harbor in 1902 and moved the corporate offices to Rochester, NH. The three brothers continued to expand the business building a vulcanized fibre mill at Tonawanda, NY in 1911. A fourth leatherboard mill at a second location in Milton, NH in 1913. The company continued as J. Spaulding and Sons until about 1927 when it became the Spaulding Fibre Company. Operation of the leatherboard mill at Townsend Harbor ceased in 1957.

Bernard was elected as a Professor at Phillips Academy which brought the family to Andover. The Allen's first rented the Carpenter - Holt house at 77 Bartlet St. (numbered 67 in 1900). The 1900 census lists the Allens three children and eleven boys, all students at Phillips Academy boarding with them.

The Allens moved into the Spaulding house in 1901 and were residents here until the end of the academic year at the Academy in June 1920. In 1910 Emma Spaulding's mother Elizabeth Hotckiss age 65 and a widow had moved in with he daughter. The also list a domestic servant Dora Moynihan age 25 from Ireland.

Bernard M. Allen took a job teaching at Cheshire CT prep school and the family moved back to Connecticut in June 1920. The property was then sold the Randall A. Hurley on June 21, 1920.

Randall & Bridget became Naturalized citizens on Sept. 21, 1906. Randall lists his occupation a day laborer and later laborer with the Rail Road. They purchased their first home at 56 Bartlet St. on June 21, 1920. Sadly Randall died less than two years later on Mar. 4, 1922. Bridget Hurley would continue to raise her family. Many of her children lived in the home and contributed to its upkeep through the years. Bridget died in 1955 and is interred with her husband in the family lot at St. Augustine's Cemetery in Andover, MA.

At a special Town Meeting on October 6, 1969 the Town voted on Article #7 to take the property by Eminent Domain for School purpose. At that time the former Stowe School, next door was about to be converted to the School Administration building. The Central Elementary School (Doherty Middle School today) was about to be renovated into an open concept building. The Hurley property was seen as future expansion possibilities. The Hurley family was forced to move from their much loved home.

The house was razed in 1970 and and the site grassed over. The large rear yard was made into playing fields and a soccer field which is still enjoyed by children and residents in town.