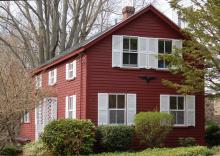 One of several homes built by Pike Soap Company for employee housing. Factory also located on same street. This row of structures 48-60 [excluding 54] were most likely all built at the same time by the same builder; most have been altered in some way. An excellent example of factory housing in the early stages of pre-industrial/pre- Shawsheen Andover.

This house is the best example among its peers as far as the originality of the structure. It is less altered than other houses on the street and gives a good idea as to what these homes looked like when they were first built.

Known as "Ram Cat Alley" in its heyday.