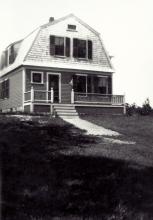 Architectural significance:
The dominant feature of the one-and-a-half story wood-shingle house is the steep gambrel roof, pierced by shed-roof dormers on east and west slopes. It is surrounded on two sides by a broad open veranda. It is accompanied on the lot by a two-bay garage with a pyramidal hip roof and novelty siding.

Historical significance:
This house and garage were probably built about 1915 by Louisa R. Bailey, who purchased the property in 1911 from the Shattuck family. Louisa Rounds (Wentworth) Bailey was born in in 1877 in Hiram, Coos Co., Maine, daughter of John and Lucy M. Wentworth. Louisa was the youngest of five children. She came to Andover, MA and married on Nov. 18, 1889 to Alfonso Augustus Bailey, b. Sept. 6, 1860 in Andover, son of Warren Augustus & Sarah (Nay) Bailey. The Bailey farm was off River Road near the present day Laural St. Louisa & Alfonso would have two children: Mabel Roxie b. Nov. 18, 1890 and Warren Augustus b. April. 30, 1892. Sadly Alphonso died of Consumption on July 16, 1893 leaving Louisa with two young children. Louisa would live with her in-laws Warren & Sarah Bailey. Her infant son Warren A. was left in the care of her parents to raise in Hiram, Maine. Louisa would re-marry two years later on Aug. 14, 1895 to her brother-in-law Henry Hersey Bailey, b. Sept. 19, 1865.

Louisa & Henry would also have two children, Ethel Marion b. May 15, 1896 and Arlon Wentworth b. Nov. 4, 1898. Once again Louisa would become a widow when Henry H. died on Jan. 7, 1900 of Apoplexy from alcohol. In the 1900 census she continues to raise her children with the in-laws. Warren Bailey died on May 2, 1909. In the 1910 census it appears that Louisa is living in the home at 59 River Road. Now 45 years old she is a dress maker. Her daughter Mabel, age 19, is a stenographer for the American Woolen Co. It has been stated that she was a secretary for William M. Wood. Ethel 14 and Anton 11 are students at the North District School across the street. Annie Shirley age 30, the school teacher boards with the Bailey family. Once the children are established in occupations, Louisa sells the property and the family moves to 4 Avon Street near the center of Andover.

Joseph A. Gleeson purchased the home on July 7, 1919 and sold a year later to Helen W. Manning, wife of Francis J. on June 25, 1920. The house and property went through a long series of owners, almost none holding the property for longer than a decade. According to neighbors, the house had been recently sold to the town to allow expansion of the adjacent Greater Lawrence Vocational Technical High School School.

Paul F. & Cecile I. Kelley would be the last family to own the property, purchased on May 31, 1972. They owned for 16 years then selling to the Town of Andover on Aug. 15, 1988. The home was later razed and the property annexed into the Technical High School campus.