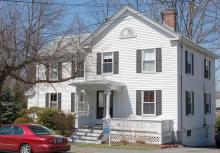 This lot and house was once part of the property at 2 Chestnut St. "Rose Cottage" which Abraham and Elizabeth N. (Lord) Marland acquired from the Marland family in 1901 after the death of his mother Sarah N. Marland. The house lots were divided off at the time of sale to James & Mary Ellen Anderson in 1919. James Anderson sold the home at 6 Chestnut to Helen Melledge, wife of J. Harold Melledge on Nov. 14, 1919.

The house was built on the side yard by the Marland family before 1880. In the 1880 Federal census, son William Marland age 41 Postmaster, wife Salome J. 29, children Helen 4, son George A. 1, a cousin Harriet K. Webb 52 and domestic servant Annie Knipe 23 from Ireland are all listed next door to his mother. Sarah 67, his single brother Abraham 38, Ticket Agent for the B&M RR, Aunt Mary K. Northey and a domestic servant Kate Steele 19 from England.

His brother Abraham (b.1841- d. 1911), or Abram as he is also listed, worked as the ticket agent at the depot of the Boston & Maine RR in 1880. Abraham was also appointed Postmaster of Andover from February 14, 1890 - 1893 and then served as the Andover Town Clerk. His father William Sykes Marland died in 1847 and his mother Sarah was left to raise six her children. Sarah moved into the Rose Cottage with her family and sister Mary King Northey about 1852. Her sister-in-law Martha L. (Marland) Punchard had acquired the property in 1852. Abraham's mother and aunt Mary lived together for nearly fifty years before their deaths in December 1900 just two days apart.

Abraham watched over his mother and aunt. He married on Dec. 7, 1881 in Salem, MA to Elizabeth N. Lord b. Feb. 1857 in Salem. They had two children one which survived Harold W. born June 2, 1890. In the 1900 census Abraham, Elizabeth and Harold are living at 6 Chestnut St. and his mother and aunt with two servant girls living in the Rose Cottage. His brother William and Salome are running a boarding house at 12 School Street.

Abraham purchased the property from his family in 1901 after his mother's death and he moved in to the cottage and rented out the house at #6. The 1910 census lists Earl H. Drescher age 42, born in Germany, naturalized citizen 1873, wife Flora I. 36 and daughter Marguerite 17. living here. Drescher is an accountant in a mill.

Abraham Marland died on May 11, 1911 and was interred in the family lot at Christ Church Cemetery. Elizabeth and Harold Marland continued to live in the cottage until selling in 1919 to James Anderson. Elizabeth died in 1926.

Helen A. Melledge, wife of James Harold Melledge purchased the property from James Anderson, who bought the Rose Cottage, on Nov. 14, 1919. Helen & J. Harold Melledge had built a home at 66 Bartlet St. in 1908 and lived there before purchasing 6 Chestnut. Harold was an accountant and worked in Boston. Melledge owned for six years then sold to Herbert W. & Annie G. Auty on June 4, 1925. The house was with the Auty family for 64 years before Annie Auty sold to James C. Kendersha & Carolyn M. Wall 1989. They married and lived here for 15 years.