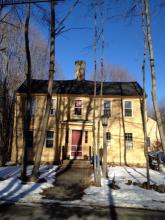 This home was built during the Federal Period in the typical five bay facade tradition, with center door with window above, and double windows flanking both sides top and bottom. A Greek Revival entry porch was a later addition. The first floor held 3 fireplaces.

This house is said to have been moved to this location from the corner of Woodland Rd. and Salem Street. Deeds support this statement as the land was developed along Salem St. from Woodland Rd. in the 1920s. A site plan #536 of "Property of Theron H. Lane, Andover MA Dec. 25, 1923, by John Franklin, CE". shows 8 house lots from the Jaquith property on Salem St. extending to this lot #8 on Prospect Hill Rd. A 1906 map of Andover shows no houses located along this section of road. At the intersection of Woodland (Missionary Lane) and Salem streets are two homes of Joseph Johnson marked #72 and #74 on the 1906 map of Andover. The 1830 and 1852 maps place Charles Wardwell at that location. We know from the deeds that the smaller home at #74 was occupied by Osgood Woodbridge and acquired by Charles Wardwell at auction in October 1818 for $163.51. We believe that the Wardwell home at #72 Salem St. is the house moved to 6 Prospect Rd.

The Property was sold to John W. & Elizabeth (Morgan) Crowley on Nov. 23, 1951. The Crowley family owned the home for 62 years. John W. Crowley b. 1912, son of William & Mary (Buckley) Crowley was a Andover Firefighter. He was married to Elizabeth Morgan b. 1925. John died July 8, 1986 in Boston. His wife Elizabeth was heir and the property was later placed in the Crowely Family Trust with daughter Joan (Crowley) Mailhot as Trustee.