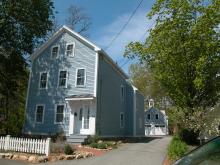 The Ballardvale Machine Shop Corp., John Marland, President, John Howe Jr. partner purchased much of the property along Center & Marland St. in 1847. They then sub- divided the Pole Hill land into house lots and began auctioning off parcels in the Village on Wednesday, July 28, 1847. Auctioneers were Loring, Abbot and Porter of Boston. Marlaand later went bancrupt and all his holdings went to the Ballard Vale Machine Shop CO. assignees.

A map of the Ballard Vale Machine Shop Company holdings was drawn out by Franklin Darracott in 1848. This property, numbered Lots #11, #13, and #15 on the plan of land.

Matthew Winton was born on 14 April 1825 in Derry, Ireland, (now Londonderry, No. Ireland) son of Robert & Lititia (Milton) Winton. He came to America on Oct. 16, 1845, according to his naturalization papers on Feb. 19, 1867. Matthew was a Painter. It appears that he returned to Ireland as we have Matthew, wife Jane and infant son Robert J. arriving in Boston on the Ship "Living Age" from Liverpool on 21 Sept. 1850. All census records state Robert J. born in Massachusetts and may have been born aboard the ship. Jane born in Antrim, Ireland, 24 June 1824, daughter of David & Letitia (Plunket) Shaw.

Daughter Ellen Jane married Edward A. Miller (B. 1843 - d. 1877) and had two sons; Edward E. and George R. Miller. After her husbands death she lived with her parents. Ellen remarried to Charles Henry Shaw and they would purchased the Price house next door at 81 Center Street.

Matthew died on 21 Sept. 1884 of chronic asthma. age 59y 5m 9d. Jane died on 19 Dec. 1896 of valvular heart disease. Jane was 72. Her family where heirs to her estate and she willed to her son David J. the use of the stable barn. Youngest surviving daughter Letitia (Winton) Tibbetts, wife of Fred M. B. Tibbetts would take a mortgage loan on the house in 1900 from her brother Matthew, executor of his mother's estate. With the death of Letitia Tibbetts the estate went to Lilly Ann Winton of Orange, CT on June 26, 1906.