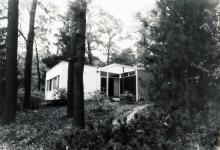 The house was designed in 1949 for Florence Neill of Swampscott, MA, by Norman Fletcher. Fletcher was President of The Architects' Collaborative (TAC) of Cambridge (1977). TAC also did the Arts and Communications Building and Science Building at Phillips Academy. TAC was founded by Walter Gropius, "Father of the Bauhaus" movement in modern German architecture and Fletcher's architecture professor at Harvard.
This house is probably Norman Fletcher's first residential design to be realized. It is based on the modular plan of design and according to the present owner, Dr. Edward Roddy, "There is not a bit of wasted space in it!"

Florence M. Neill purchased the lot on Sept. 4, 1947 and the house was completed in 1949. Neill would live her until her death in 1967. Her estate was administered by the State Street Bank & Trust Co. of Boston and T. Clinton Johnson as Executors. The house was then sold on August 17, 1867 to Edward G. Roddy a professor at Merrimack College. Roddy wrote the book "Mills, Mansions and Mergers" which gives a complete history of the development of the American Woolen Co., William Madison Wood and his dream community Shawsheen Village.

On October 23, 1984 Dr. Roddy gift deeded his home to Merrimack College with the provision that he had life tenancy in his home. After Roddy's death the home was sold by the college to Peter E. & Suzanne Price of 20 Johnson Rd. Price then sold to Spencer H. Owades & Annette M. Courchesne on May 15, 1989. They owned for 13 years then sold to curnet owners Fabio & Nancy H. Piergentiti. The home was unfortunately razed for a new larger home to accommodate a growing family.

The history of the property includes Hobart Clark who sold two parcels of his land in 1846, of about 10 acres, to Mortimer C. Ferris, a Boston merchant. Ferries later sold the property to George J. Thornton on July 1, 1851. Thornton paid $3100 for the land and took mortgage loans from Ferris. George Thornton was a gardener and had an extensive garden nursery and home on the property. Thornton later sold to George H. French on on Mar. 25, 1856. French then sold to Charles B Clark, wife Lydia of Concord, MA, a Bookbinder on Mar. 25, 1856. Clark paid $3000 for dwelling house and 10 acres of land.

Clark took a mortgage loan with the Trustees of Phillips Academy for $1200 in 1856 but was declared insolvent on Feb. 2, 1857. His estate was assigned to Moses D. Phillips of Boston and sold on June 12, 1857 to George L. Abbott & Moses Clement, both house-wrights and business partners. Abbott & Clement paid $1500 for the property and assumed the PA mortgage. It is not known if Abbott & Clement enhanced the property at that time but they did hold the parcel for two years. They then sold to Samuel Raymond on Aug. 9, 1859 for $525 plus assuming the outstanding mortgage.

Samuel Raymond, wife Emily F. M. owned for eight years then selling to Rev. Francis H. Johnson on Feb. 11, 1867. Johnson paid $10,000. for the house and 10 acres. Johnson added three more parcels to his property which had at that time a commanding view of Andover from his hill top home. Rev Johnson married Mary A. "Marcy" Dove b. 1840 - d. 1867?, daughter of John Dove, of the Smith & Dove Manufacturing Co. in Andover. This residence remained in the Johnson family until 1934. The estate was sold to Fred E. Cheever, an Andover native and Real estate agent.

It was Cheever who created Johnson Acres housing development on the former Johnson estate. The mansion house was razed and the main driveway became Johnson Rd. with Cheever Circle, Cedar Rd. Coolidge and Cabot Roads. Cheever embraced the Colonial Revival as many of the homes built reflect that style. His lots were sold with certain deed restrictions including each home had to worth at least $8000, a single family residence, with setbacks, garage stipulations and no per-fabricated homes were allowed.

One wonders what Cheever thought of Florence Neill's International style home but it did meet all the criteria set in the deed.