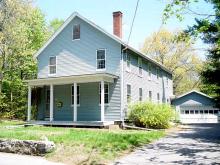 This property when purchased by George Buchan from Sarah Frye on October 22, 1863 comprised about 8 acres of wooded land in two parcels. The first lot of 4½ acre bordered on Shawsheen Rd. to Lincoln Circle. The second parcel abutted the first and encompassed Cyr Circle northward.

Both George B. and his father-in-law George Lawson worked at Smith & Dove Manufacturing Co. as Flax Dressers in the hackling department. They lived together in Abbott Village in the Cenus of 1860. George Buchan enlisted during the Civil War and served in Company K Regiment Mass. Volunteers. (Perhaps Buchan suggested the name Lincoln St. in honor of the slain President?)

Father-in-law George Lawson died on March 27, 1877. His widow Elizabeth then moved in with the Buchans. Sadly George’s wife Elizabeth P. died on July 20, 1887 at age 46. Of their children; Ada A., George W., Annie J and Gertrude all remained single and continued to live in the homestead.

Son John S. would be given the parcel lot next door at 5 Lincoln St. on October 1904. John S. a plumber, would marry Annie S. Porter and lived there.

Elizabeth Lawson died June 13, 1902 age 83. George Buchan died on Mar. 16, 1909 age 73 of heart failure. His obit states “He was one of the old guard of intelligent and well read Scotsmen who were at one time numerous among the hacklers.” (AT 3/15/1909) George and family are interred at West Parish Garden Cemetery.

The house continued in the Buchan family eventually owned by son Raymond L. Buchan from 1925 to 1972. Raymond also a veteran, served during the Spanish-American War as a Private Company L 8th Regiment Mass. Infantry. Raymond was business partners in Myerscough & Buchan garage first on Park Street then built 90 Main St. For several years this home was rented out. Raymond died on March 8, 1972 at age 94 years. His estate was administered by his nephew Norman Buchan and the property was sold to Victor L. Haten on Nov. 15, 1972.