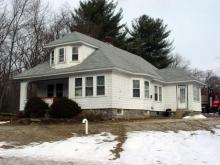 This bungalow home is no longer on this site as it was razed in 2008 for the expansion of the St. Constantine and Helen Greek Orthodox Church complex and parking lot which now occupies the site.

The farm was eventually taken over by his son John Durant and upon his death inherited by his two children Anabella and John E. Durant, both minors at the time. John B. Scott, their guardian, sold the property through probate license on Sept. 6, 1892. The property was sold to Mary F. Fitzgerald for $1340 and included all buildings there on all 20 parcels of land. With a mortgage settlement with a John T. Sweeney, the property was then sold to her husband Daniel Fitzgerald on July 21, 1899.

Fitzgerald then sold off this parcel of 5 acres with buildings to Sarah A. Trauschke on June 15, 1900. It is most likely that the home was built for Sarah and her family. In May 1921 the property was transferred to William F. Trauschke and Roland E. Trauschke.

Fred W. Doyle purchased the triangular shaped property on December 1, 1928. Fred W. wife Irene raised their family in this home. The Doyles were carpenters and established their lumber company at this site. Doyle purchased a second adjoining lot to the east in January 1945 and in the 1960's expanded the operation building a large lumber storage building and workshop to the rear of the property. The Doyle’s built a new home south of the former house at 63 Chandler in the mid 1950's.

St. Constantine Greek Orthodox Society of Lawrence at 825 Essex St. purchased the Doyle property on Mar. 17, 1988. Doyle moved their business operation to River Rd. The new Church building, the St. Constantine and Helen Greek Orthodox Church was built first, near the site of the lumber storage building. The bungalow house was used by
the church office space. In phase two of the expansion to the church for a function hall, kitchen and classroom space the remaining sheds and house were razed for parking in 2008.