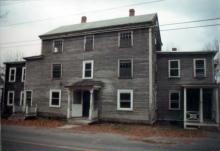 This building was the last of the "old commons", or first boarding house and dining hall for Phillips Academy students. Original location of the dormitory was on the north side of Phillips Street just west of the Peabody Archeology Museum.

There were two rows of identical dorms, one called "Latin Commons" on Phillips Street and the "English Commons" aligned along Old Campus Road across the playing fields at the north end. When Phillips Academy began to expand the campus the former dormitories were either razed or sold and moved off the campus grounds.
From Fuess book:
p. 131--1809 - funds to erect Commons dormitories
p. 229--1834 - 5 Academic Halls . . . were completed in their location on the north side of Phillips Street . . .row of "Latin Commons" approx. $1500 apiece and a (1836) row of teachers halls or English Commons

p. 508--1903-06 with the erection of the Archaeology building, the Latin Commons were torn down and by 1906 the English dormitories had been sold and the last one had been moved on rollers across the old campus to a new location where it was to be used as a tenement.
Two dormitories were moved to down to Whittier Court at the north end of the "Playstead" and were converted into tenement housing. This dormitory was moved to Highland Road and converted into an apartment house. The center of the building is the original Common structure and the ells were added when moved to the site.

From Allis book: - p. 359--"one exists to this day on Highland Road, though so completely remodeled as to bear little resemblance to its original form"

The lot of land once belonged to John W. Cochran of 69 Highland Rd who sold the property to William Watson on July 1, 1905. Watson sub-divided the property and sold off lots.

Mary McCartney of Salem, MA purchased this empty lot of land on July 25, 1906. The Old Common building was then moved onto the site. The deed was transferred by Mabel B. Huntress on Dec. 17, 1917 into joint hands of Mary McCartney & Annie McCartney.
Michael McCartney took ownership on July 26, 1932 -

William A. McCartney's estate heirs were Marcelle L. & John C. McCartney. The Property was then placed in the McCartney Family Realty Trust, Edward C. Todd, Trustee on May 21, 1986.

The McCartney family sold to the Trustees of Phillips Academy on Oct. 16, 1987.after 81 years of ownership.
The following November 1988 the building was razed and the lot returned to its natural state.