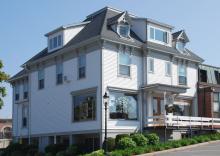 The John H. Dean house was built in 1877 by local merchant John Dean. Dean was a tailor and owned and operated a men’s furnishings shop. May 17, 1856 AA – New Tailoring Establishment – John H. Dean – Merchant Tailor – Main Street – a few steps above Blood’s Restorator, formerly Trulan’s Store. His first store was located at 41 - 43 Main Street in the shop building owned by Nathaniel Swift. Oct. 22, 1859 AA – A brick sidewalk has been laid in front of the stores of Messrs. J. H. Dean & J. Walton, on Main Street. It would add greatly to the comfort of pedestrians especially in the muddy season of the year, if it could be extended to meet the brick walk in front of the bank building. On May 5, 1866 Dean bought Dr. David Howarth’s house at 44 Main Street directly across the street.

June 1, 1866 AA - John H. Dean has enlarged the lower rooms of the house, by a projection of seven feet in front. Two large bay windows with handsome finish adorn and beautify the building. Half of it will be occupied for a store and tailoring establishment and the other half as a family residence. July 27, 1866 - John H. Dean has removed to his new store & tailoring establishment on Main Street opposite his old stand, and is prepared to fit his customers to a T.

John Dean’s business was well patronized by the community as well as the students of the Seminary and Academy on the Hill. Dean purchased the lot of land at 77 Main Street from George F. Swift in 1877 and built this grand home next to the former M. C. Andrew’s house. The lot was once part of the land of Amos Blanchard at 97 Main Street in 1819. A deed restriction stated that no building could be constructed closer to Main Street than the Andrews house next door.

The Dean’s oldest daughter Caroline A. Dean was a local public school teacher and taught at Stowe and John Dove Schools. After the death of their mother, the Dean house was sold in 1903 to Charles E. Howland. The Dean family, three sisters and their brother J. William then moved to the old Ballard house at 104 Main Street. All are interred in the family lot at Spring Grove Cemetery.

Charles E. Howland, a partner in the firm of Babcock & Howland, took a mortgage through the Andover Savings Bank, which took possession of the property in 1910 and sold at auction to Mary G. Grout, wife of Frank B. Grout. May 13, 1910 AT p.1 – Old Dean place on Main St., later Howland estate sold to F. B. Grout. Aug. 26, 1910 AT - Frank B. Grout and family are moving into the house on Main Street recently purchased by Mr. Grout.

The Grout family lived at 26 Walnut Ave. before purchasing the Dean House. In 1913 Frank Grout was a proprietor of a hotel in Boston and the resident directory lists two sons, John W. and Walter as students. In 1918 Frank is now a clerk in Lawrence, John W. a wool sorter and Walter T. is enlisted in the U.S. Army. Mr. & Mrs. Gout owned the home for thirty seven years before selling to Ray Johnson in 1947.

Johnson sold the following year to George & Margaret Fuller who owned the Tudor style house across the street at #76 Main Street where they had conducted a Funeral Home for several years. The Fullers would sell off both properties in 1950 and Karl & Geneva Killorin purchased the former Dean House. Killorin rented apartments in the home and had his real estate office here. In March of 1965 the Town of Andover considered taking the property to expand the municipal parking lot and possibly build a new town office building on the site. Voted down at town meeting.

The property was purchased by Danton Realty Trust in 1965. The former house was turned and moved to the rear of the property in 1966 and the current business building was constructed in 1967

Andover Townsman – Dec. 8, 1966 – Danton Awaiting Steel Shipment –
John Davidson of Danton Realty Trust said Wednesday that his company will begin construction of the new commercial building on the property adjacent to the Post Office in about five to six weeks, or upon delivery of structural steel.
Meanwhile, renovations to the old Killorin building will be underway to fit in with Danton’s plans for development of the entire site.
The company will construct a traditional brick-on masonry building on the frontage of the lot, which adjoins the municipal parking lot on Main Street. This building will be linked to the former Killorian building, now moved to the rear of the property.

The project has been held up for some weeks while the Zoning Board of Appeals considered Danton’s request for permission to incorporated additional apartments in the old building, in violation of zoning area requirements for residential use in the district involved.
Danton initially asked to add four apartments to the five already existing in the Killorian property. It later shaved this request by two, asking for a total of seven units
The Zoning Board released a decision this week authorizing a variance to permit seven apartments. Since Danton’s proximity to the municipal parking lot cuts into requirements for on-site parking, the developer can utilize more of the lot for construction that would otherwise be permissible.
Davidson reports that there will be three new retail stores in the new building and one in the rear.

The first two tenants on Main Street in the new building were the Andover House of Clean, laundry and dry cleaning service and Kenneth Thompson’s Stationary and Office supply store. Thompson’s later moved down to #45 Main Street in September 1985. The Thompson store location became a bank branch for Pioneer Bank? for a few years then was leased by H & R Block Company. The House of Clean 1967-2007 closed in 2007 and the store has remained vacant for a few years.
Several other small businesses have taken space in the rear property at 77R. Andover Eye Care being one of the longest tenants,