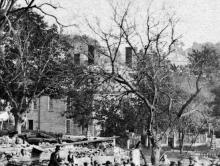 The parking lot of Bank of America at 10 Central Street was once the site this very large Mansion house owned by Joseph Stevens Jr. b. 1748 Danvers, son of Joseph & Hephzibah (Baker) Stevens. When he married on July 7, 1772, he is list as living in Danvers, MA. His wife, Sarah Abbott of Andover, b. Aug. 1, 1747, was the daughter of Stephen Jr. & Mary (Abbot) Abbott. Joseph’s occupation was Trader or Merchant, as recorded in several deeds.

The house pictured above is a detail shot from a larger photograph of the destructive fire on Elm Square that leveled all the homes and businesses from Pearson St. to Essex St. in 1870. The house when built was a Georgian design similar to the home at 49 Central St.

The large roof is a double hip, or hip on hip. Two massive central chimneys with a third on the east end of the house provided heat to all the rooms. Two roof dormers are also visible behind the trees. The windows are tall with 9 over 9 panes on the double hung windows. The enclosed front yard sports an elegant fence with two center entrance gates. Two simple picket fences run along both sides of the house. The one to the left is a right of way to the business blocks up on Main St. of which #9-11, #13-15, and #17 Main St. have survived today. The east end of the house was a half addition with separate entrance making up a third of the front facade. No other images have yet been found of the house in its original state. By the 20th century the house had become a boarding and tenement house. The roof dormers were removed, the fences disappeared and the “Imperial house hotel” was built up on the east end with less than a foot between the buildings. An old fish market building had first occupied the spot and was moved to the rear of the house. A right of way then ran up the south side of the house to the rear of the property.

Joseph Stevens Jr. acquired several properties in both the North and South Parishes. He purchased his father’s home in the North Parish on April 18, 1793. On Aug. 18, 1797 he acquired the homestead of Abner Abbot, a blacksmith, on the east side of Boston Rd. (Central St.) near the South Meeting house. The parcel included the house, barn, other buildings, and the blacksmith shop, of which a portion of it was on land of Capt. Henry Abbot. The parcel contained about 55 sq. poles. Abner also sold his church pew #57, on the lower floor of the South Meetinghouse which he had purchased from the church committee on Dec.2, 1788. Joseph died seized on Feb. 20, 1803 in Andover, MA.

Sarah Stevens bought and sold off properties of the estate in the years that followed. On Nov. 8, 1811 Sarah buys a one acre 26 pole orchard lot with building from Titus Coburn. Other parcels were used as collateral to acquire loans. One loan contained eleven parcels of land.

Charlotte Helen Abbott's notes - "Ben Abbot Family pg. 39 - "Old Dorcas Abbott, great grandmother of Hannah Flint, a decedent of Samuel Phillips (3) and second wife of Jonathan Abbott (5), lived in the old Stephen place with her son, Capt. Stephen, and used to sit by the kitchen fire and blow the old bellows. - And.. father used to go over there evenings, and heard her prophecy that in five generations from her day, all three of the adjoining Abbott estate would be in the hands of people not bearing the name of Abbott, and mostly strangers to the land. All has come true in 1906."

"Old Dorcas had a back room in the house, and when Phebe Sibley's beaux came to call, she would not go to bed until they were gone. One night the beau went home early and Phebe went to bed., forgetting to tell the old lady that the coast was clear. Poor old Dorcas sat on the stairs all night, waiting and listening."

"One of the Maine cousins who came visiting was very tall and wore a silk hat. Sam Abbott, brother to the girls, hid the hat in a dark cupboard under the stairs. The visitor had to borrow a hat to wear home, and the "topper" was not discovered until a grand clean up, 40 years later."

Major Stevens lived with his mother, then in the house opposite the Baptist Church, and had money. He lost it all later in ventures in MD-Ohio Company, etc. "Aunt Stevens" died without heirs, save one Jo(seph), and after his death the estate was bought up and fell to the Abbott heirs. Guess they bought the place; Capt. Stephen Abbott very likely got it.

"Joseph Stevens used to keep a rag exchange here, at the last of his trading, and he dickered with the Paper Mill in Marland Village. William Stevens was obliged to take boarders to keep above water."

Their daughter Mary Lovejoy Abbot married Samuel Gray in 1835. They built a house on the adjoining lot at 12 Central St. in 1840. Samuel Gray was named Power of Attorney and Trustee of the estate by his mother-in-law Hannah. After her death this home was held by the children in equal shares for the next 42 years. The Abbot heirs sold the house to Moses Foster on Oct. 5, 1882.

Moses Foster then sold the property to the Andover National Bank on Jan 1, 1883. The bank at this time occupied their Federal style building on Main St. They wanted the land behind the bank for future expansion. In 1889 the old bank was demolished and the current Richardson Romanesque building was built.

The old Stevens – Abbot Homestead was then sold to Dennis Sweeney on May 10, 1890. Sweeny then built the hotel and restaurant building later known as the Imperial House.(see #6 Central St) Dennis Sweeney – land with large tenement house and out-buildings – out buildings to be removed by June 10, 1890 – reserved 10’ right of way from Central St., use of well for Mrs. Gray, & a tenant, Charles L. Carter, in a portion of conveyed premises allowed 3 months from May 10, 1890 for the removal of his Fish Market from the premises. Paid $2425 . The homestead became a tenement house. Dennis Sweeney died on April 11, 1929 and his wife Lucy A. Sweeney would have inherited but died two months later on June 24, 1929. Their daughters Edith D. Sweeney and Miriam Sweeney then inherit the Sweeney estate. The Sweeny family had owned for 53 years before selling the Imperial House on Oct. 27, 1943 to Gregory P. & Rita On November 15, 1844 Christie acquired the homestead.

Andover National Bank purchased both properties on July 12, 1947. The old homestead was then demolished for a parking lot to the bank. The Imperial house was demolished in 1950.