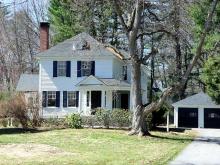 This farm house was built in 1893-96. The house is two story wood construction and wood clapboard siding, hip asphalt roof with a wrap-around porch on the north east corner. Originally constructed with a summer sleeping porch on the second floor northwest corner, this house was a departure from the center entrance colonial homes built in the immediate area.

The setback from the street with long sweeping lawn creates an elegant setting. Originally sited on five acres of mostly a wooded lot, the house is built asymmetrically in a simplified, “Four Square” style. An elegant interior staircase, formal living room with fireplace, built in cabinets in the dining area are a nod to both Victorian and Craftsman elements. A small barn to the west of the house completes the setting of this gentleman farmer home.

The Clark farm was formerly the Henry Dane farm who was given the property in 1811 by his father Philemon Dane. The Dane homestead was located at 97 Argilla Rd. was part of a greater land grant to the Rev. Francis Dane in 1660. Henry Dane died in in 1840 and his widow sold to Ezra Abbott in 1843. John Abbott sold to Thomas Clark on April 25, 1844. Most farms on this street by the 20th century were poultry, strawberry, produce, two dairy farms and a yogurt and cheese factory.

A five acre lot was first subdivided out of the 42 acre west side parcel of the Clark farm when it was sold to William A. Wood in 1917 President of the American Woolen Company and became part of the Arden Trust. An additional house lot was later created by Joseph F. & Marjorie Raichlen for their son Robert to build a home at 74 Argilla Rd in 1948. The Eaton family created the sub-division of Cattle Crossing in the 1970’s from the remaining wooded acreage. Local zoning required 150’ frontage on the street which required the change of address from 80 Argilla Rd. to 3 Cattle Crossing and an extension of the driveway from the new way.

The house was built in 1893-96 by Jesse H. Clark on land once owned by his father Thomas Clark family across the road from their farm at 85 Argilla Rd. The 42 acre parcel on the west side of Argilla Rd. is now Strawberry Hill Rd. and Rennie Drive neighborhood.

The Clarks retired to 80 Argilla Rd. in 1919 to the 5 acre parcel where they had built a new home. Their daughter Lydia A. Clark was a teacher, later taught at Ohio State and married Bertram Benedict. Marion Clark married in 1919 to Joseph Myerscough and had one daughter Mary A. b. 1922. Marion and her sister Edith L. Clark Moulton lived with their parents. It appears the Marion & Edith had separated from their husbands. Mary A. Clark died on May 11, 1931 and Marion died in Ohio on Feb. 26, 1933. Jesse H. Clark died in 1932 and the property was sold to Genevieve H. Wilder of Montpelier, VT on July 13, 1932.

Genevieve H. Wilder may have been Robert H. Wilder’s mother as Robert & his wife Verna are listed in the home in 1935. Robert is a construction engineer, age 29 and Verna is also 29. Genevieve sells the property to them in 1937 and in 1938 the Wilders take a mortgage with the Merrimack Coop. Bank in Lawrence. In 1940 the bank foreclosed and the house was sold to Olive G. Stanton, wife of Carl Stanton on Dec. 6, 1940.

Joseph Frederick Raichlen was born in NYC on April 15, 1891, son of Lewis F. & Anna M. Raichlen. His father owned a paper box company, Champion International Co., and Joseph and his brother Francis worked in his business. Joseph married in May 16, 1916 in NYC to Marie Eugenie Filbig b.1892 in NYC. They had two children, Robert b. 1919 in NYC and Ruth b. 1924 in NJ. As Joe was in the sales end of family business, it took him and his family to many locations, including Oregon, Washington, Illinois and Nevada prior to coming to Andover. The company had a manufacturing plant in Lawrence. Joe married a second time on Feb. 21,1940 ib Snohomish, WA to Marjorie Elizabeth Poole b. Feb. 5, 1898 in Yarmouth, ME, dau. of Charles L. & Henrietta (Hayer) Poole. Marjorie was a Stenographer for a lawyer. Both Joe and Marjorie were artist, enjoyed painting and later retired to Rockport, MA. They always welcomed the kids in the neighborhood at Halloween and had the best pink lemonade at the ready on a hot summer’s day. They sold the house to James H. 3rd & Nancy N. Eaton on Aug. 17, 1967.

The current owners have done extensive renovations on the house during their ownership. A recent in-law apartment and garage was added to the former front façade facing east to Argilla Rd. on what was the long front yard.