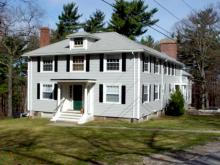 1807 – Purchased by town as town farm and almshouse.

1921 – November 1 - Special Town Meeting voted at 7:45 pm. Article1– That the town accept the following proposal submitted by William M. Wood, for the purchase of the remainder of the Town Farm property. “The Board of Directors of the American Woolen Company offers the sum of Fifteen thousand dollars ($15,000.) for the remainder of the land and buildings known as the Town of Andover Poor Farm situate in Shawsheen Village west of the Boston & Maine Railroad tracks in said Andover. It being understood that the building may be occupied and used by the Town until provision can be made for the removal of the inmates not later than October 1, 1922. The vote stood 107 for and 8 against acceptance.

1922 – Town Meeting March 13th. Article 9, To hear the report of the committee on housing the inmates of the Town Farm and to see if the town will appropriate the sum of $10,000. in addition to the $30,000. now on hand, received from the sale of the Town Farm property, for the purpose of erecting a new building and other necessary expenses.

Mr. Donald:
Your committee started to make investigation for housing of the inmates of the Almshouse soon after the Special Town Meeting held November 1st [1921]. We have visited a number of towns to see if we could get any good points in the matter of a new building for the Town’s Poor, but failed to find anything that could compare with our old home. We have had plans made for a 27 room house to accommodate our present 11 inmates and 6 of the matron’s family and servants. This house of wood construction and other expenses will cost by estimate $40,000.
4 rooms for men, two in room - 8 beds
5 rooms for women, two in room - 10 beds
9 rooms for in mates, two in room - 18 beds
1 men’s hospital 4 beds crowded - 4 beds
1 women’s hospital 4 bed crowded - 4 beds
Total beds for Inmates crowded - 26 beds
2 Rooms for servants
3 Chambers for matron
16 Bed rooms all told in the house

"There were three locations in view. We finally settled on Carmel Woods. We would put the house on the south end of the woods taking up about an acre. We wouldn’t fence it in. There are forty one acres in the whole lot originally belonging to the town farm. There is some talk of a park but nothing has been done there for many years. We think it would be an attractive place."
Voted in the affirmative.

May 26, 1922 pg 4. Ground broken for new Town Home gives description some cuts in design had to be done.

1923, March 2 – Town Meeting – Article #4. Approved.
The appropriation of $40,000. made at the last town meeting was insufficient to complete the Almshouse due to the changes and additions insisted upon by the officials of the State. The sum required to complete the building is $3000 and a additional sum of $3000 is asked in order to build a barn and a garage and to do necessary grading.

1923 March 12 – Annual Town Meeting. Article 4. To see if the Town will vote to appropriate the sum of $6000.00 to pay the unpaid bills contracted by the Almshouse Building Committee, and to build a combination Barn and Garage, on petition of the Selectmen.

Mr. Donald: "I make a motion to raise the sum of $6500. for the unpaid bill and to build a combination barn and garage."
Mr. Angus: "When this matter was brought before the finance committee it was gone over very carefully with the Selectmen, and they asked for the sum of $6000, which the finance committee unanimously recommended. I wonder if the Selectmen are not willing to explain to the voters the increase over the amount recommended by the finance committee."
Mr. Donald: "Since we have reported to the finance committee we find that we owed $3211.; that leaves a balance of $3289 to finish up the grading and build the barn and garage, providing you vote to give us $6500. These are the final figures."
Mr. Rogers: "I would like to inquire who is going to use the garage?"
Mr. Donald: "The Superintendent."
Mr. Rogers: "But he tells me that he doesn’t need a garage; he has one."
Moderator: "He will have to speak for himself."
Mr. Swanton: "I have got a garage of my own, but I am not superintendent, but only an inmate. My garage is a half a mile away. In the first place, we need a cellar where we can keep vegetables. If we don’t have a cold cellar, we have got to buy our vegetables in small quantities and that is expensive. If you build that building you can put one in, and you can keep a cow so that you can make the milk cost us a trifle less than 7 cents a quart. If you buy milk the milk, you will pay nearly 12 cents a quart. They also need a place to dry clothes. It must be done or else the women cannot do the work. Referring again to the garage, I have a car (most everybody has these days) and I have got to have some place to put it. It is true I do own one, but every time I want to go anywhere I have to walk over a half mile to get my car, and that is why we need it in connection with these other things."

Fred A. Swanton was the Superintendent of the Almshouse/Town Farm for 22 years. He stated that he had lived there 14 years (1908) at the time of the sale of the property and had been a resident of Andover for 40years (1883).

In 1891 Fred was a milk dealer and lived on Maple Ave. By 1897 Frederick A, farmer and milk dealer lives with Samuel A. Swanton, painter and Cora I., dressmaker at 75 Salem St. Fred also served as the town’s Pound Keeper and on the Special police. He was also the Superintendent of Spring Grove Cemetery from 1916 to 1938.

Mary C. (Findley) Edmands, widow of Ernest C., became the Matron of Andover Town Infirmary in 1946. Ernest died in October 1928. Mary was born in Andover March 16, 1887 and had lived at 6 Wolcott Ave. Mary worked as a proof reader for the Andover Press in 1945 and was an active journalist for the Lawrence Telegram. She was also a charter member of the “Priscilla Abbot Chapter”, Daughters of the American Revolution. She served as Matron until 1953. She had three children, Ernest J., Jean E. and Allan C, a Lt. Commander on the aircraft carrier Franklin who was killed in action during WW II.

Roland & Jean (Edmands) Weeks, son-in-law and daughter of Mary Edmands, respectively became Superintendent and Matron of the Infirmary in 1953 after Mary retired. The Weeks served until 1957 and then moved to 32 High St.

Rita Fanning. In 1958 no Superintendent or Matron are listed at 88 Carmel Rd. Rita Fanning, a registered nurse and her husband Robert, a police officer, both ages 34, are listed with 12 other elderly residents. Mary Greenwood, age 60, cook. The Fannings most likely were caretakers and supervisors to the residents and property. They continued to live here until 1965.

The 29 acre Carmel Woods, was deeded over to the Town of Andover, by North Andover in 1855 when the two parishes divided into separate towns. The woods were originally used as the town’s woodlot for cutting fuel for the Almshouse in Frye Village. In the past 150 years Carmel Woods has been considered as a possible site for the Town Cemetery in 1869, a Park in the1890’s, The New Almshouse in 1922, the high school in 1955, an elementary school in 1967 and elderly housing by the Housing Authority in 1971. Only the Andover Town Home & Infirmary and barn were ever built on the land, using just one acre.

1969 Town Meeting. Carmel Woods was deeded over to the Andover Conservation Commission by the town, essentially saving the land from any future development.