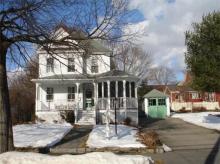 Nathan F. Abbott had two parcels of land on Chestnut St. one was 9 acres 57 rods and the other 6 acres 67 rods. Nathan died in 1879 and his wife Margaret E. Abbott sells the estate and three additional parcels off via Caleb Saunders, assignee of the Abbott estate.

This section of Chestnut St. was referenced as East Chestnut as the original Chestnut St. was only the section from Central to Main Street. Prior to naming the road it is referred to as the "way from Nathaniel Whittier's house to Israel Berry's.

Richard M. Abbott acquires the property in March 1886 and house lots are created and sold off. Richard Abbott was living in Vineland, NJ at the time of the land development.

Charles Donovan transferred the deed to his wife Sarah J. Donovan, via Edith Poor, on Aug. 12, 1903. The Donovan family held the property for 58 years. Charles died on Jan. 25, 1920 and Sarah in 1936. Her estate went to her children. Daughter Marguerite M. West had the property and through her probate, brother George W. Donovan, and sister Josephine R. O'Riordan and her children; Jane P. (West) Burke, Myles J. West, Robert West and Charles W. West are heirs. The property is then sold to her son Charles W. West on July 30, 1949.
Charles & Sarah are interred at St. Augustine's Cemetery with son George and his wife Emma.

Walter James & Elizabeth Whinn purchased the house in 1978 and held the property for 16 years. Jim & Betty lived across the street at 89 Chestnut St. They bought the house as income property, but did extensive work to update the house. They sold the property in 1994 to James R. Ash & Erin M. McDonough on Nov. 28, 1994.