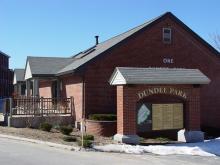 One Dundee Park; This building was built between 1872-1882 as a warehouse for the storage of raw and manufactured stock of the Smith & Dove Manufacturing Co. The flat area on the top of the hill made fore easy access for a train spur line from the Boston and Main Railroad to deliver and ship goods. The spur line once ran along the south side of the building to the end. A loading platform extended the entire length. The building was designed with six separate rooms with basements below. The first floor was built above grade to allow unloading goods directly from the railroad cars off the platform and into the building. The separated compartments are now numbered 9 -10-11-12-13 and14.

Abbott Village was established early in the 1800's with the more than adequate source of water to power the mills. Abel & Paschal Abbott moved their wool mill operation here from the North Parish about 1815. Abiel Russell was their first foreman and Daniel Saunders leased a portion from 1817-1825. James Howarth established a wool mill 1824-1847, building the stone mill on the east side of the river. The Howarth homestead was once located at the west end of this building and moved off the complex to Baker Lane.

The Abbot brothers had a successful business until about 1838 when the market took a down turn. Creditors sold the Abbot Mill buildings to Smith & Dove Co. in 1843.

Smith & Dove Co. produced linen thread and was established in Frye Village (Shawsheen Village) in 1835. The company founders John Smith, Peter Smith and John Dove were all Scottish immigrants from Brechin in County Angus. The company continued operations in both Frye and Abbott Villages gradually relocating all production up river to this location. In 1865 they became the Smith & Dove Manufacturing Co. producing linen thread for shoe laces, carpets and sail cloth. Later operations included broad cloth. Smith & Dove is said to be the first linen production manufacturer in the United States. The company continued to expand operations through the years and by 1894 had completely abandoned the former plants in Frye Village. A new Main Mill plant opened in 1894 in Abbott Village and improvements continued well into the first decade of the 20th century.

The Smith and Dove families were active in community affairs, contributors to educational institutions and helped establish Memorial Hall Library. They were all abolitionists, with John Smith and John Dove charter members of the Free Christian Church, which John Smith established. It would be the second generation of the Smith & Dove families that expanded the Abbott Village mill buildings to meet the needs of the 20th century. Worker housing, a village hall, recreational facilities and a pension fund were all established to help their operatives.

In 1927 the Smith & Dove Co. was sold to the Trustees of the Ludlow Manufacturing Associates of Ludlow, MA makers of hemp cording. The housing real estate was placed in the Smith & Dove Tenements, Inc. that year, changing the name to Andover Homes, Inc. that then sold off the housing stock to private hands. The company operations were moved to Ludlow, MA and the mill closed in 1928.

The Indian Ridge Co., Inc. acquired the mill properties and some of the housing stock. Through the company treasurer Virgil D. Harrington the mill buildings were then parceled off sold to private investors.

M. T. Stevens & Sons Co., Inc. purchased this building and the 1 Dundee Park building on Nov. 8, 1937. The Stevens Co. was established in North Andover and acquired the Marland Mills Co. on Stevens St. (now Atria Place senior living apts.) in 1879. This property was used by the Stevens Co. for wool storage. The access to the railroad line for shipping and receiving goods for their Andover operation made this a desirable site. In September 1946 the company consolidated and the name became J. P. Stevens & Sons Co. With the closing of the Marland Mill operation in 1970 the properties were sold off.

The property was then sold to Jordan J. Burgess on Nov. 23, 1982. It was during his ownership that the property was developed into the "Dundee Office Park" we know today. The former warehouse buildings were completely redesigned and the exteriors restored. Exposed brick, wood beams, sky lights, new windows and mechanical upgrades all completed with historic renovation in mind. The buildings were marketed as a unique professional office park for research & development, electronics or light assembly.

The buildings were ready for leasing in the fall of 1984. With the downturn in the economy leasing did not meet the necessary occupancy rate and the banks foreclosed. The Lawrence Savings Bank and Essex Holdings Inc. took possession of the property on Aug. 19, 1985.